The Gainsborough Heritage Centre is currently commemorating the 75th anniversary of the Dambusters raid and local connections with a temporary exhibition that is open now until 14 July 2018 as well as a 1940s themed fundraising evening.

The Centre’s new temporary Dambusters exhibition explores the story of the Dambusters raid codenamed ‘Operation Chastise’, the bomber crew, the role of the Naafi, local airfields such as RAF Scampton and the use of the Rose turret through displays and objects of memorabilia. The Rose rear turret was made and designed by Rose Brothers of Gainsborough and this was a revolutionary design and was fitted to a large number of Lancaster type BIII. The rear turret allowed for two people to sit in a more comfortable position and made the journey less cramped.

The exhibition also tells the story of Flight Lieutenant ‘Johnny’ Johnson DFC who was one of the original Dambusters and Gainsborough’s best known and loved war heroes. ‘Johnny’ born in Lincoln in May 1912 moved to Gainsborough the hometown of his mother and lived on Lea Road. Known as ‘Cuth’ he attended St Johns C of E school before studying at Lincoln Grammar School. He worked with Mr H E Cobb (a radio and cycle shop) in Hickman Street. He joined the RAF in June 1940 however, in March 1943 he was part of the squadron at Scampton who attacked the Eder Dam aimed at the industries of the Ruhr Valley. On a particular raid in September 1943 his aeroplane crashed and the exhibition details the story of how the underground in different countries helped him to escape. Johnny Johnson attended the opening of the Gainsborough Heritage Centre and on display is an autographed certificate from 12 May 1995. So come along to find out more!

Below shows an aspect of the exhibition: 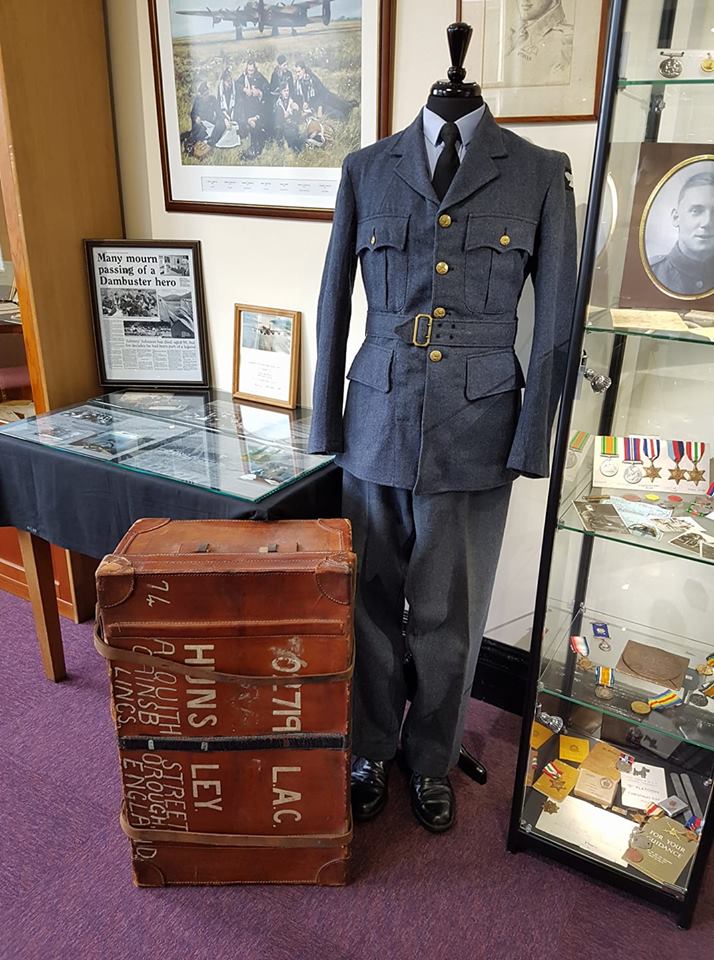 The Centre also holds the Rose tablecloth as part of its permanent displays with the embroidered names of the Dambusters including Guy Gibson the Wing Commander of the squadron. As part of the commemorations the Heritage Centre presents a 1940s Dambusters Ball and the evening will feature Room 21 Big Band and the Axholme Sisters. This event will be a chance to reflect on the war years and add to the national commemorations of the Dambusters Raid as well as an essential part of fundraising and support for the Centre. The Dambusters Ball will be hosted at the Weston Rooms, 20 Hickman St, Gainsborough DN21 2DZ on Saturday 19 May 2018. The doors will open at 7pm for refreshments to be served at 7.30pm and will include a chance to win with dress and dance prizes! To purchase tickets visit the Heritage Centre or contact to book or reserve tickets. Tickets are £20 and includes access to the Centre’s displays and feature exhibition on the raid over the event weekend (19 and 20 May 2018).

The Centre is open every Tuesday 10am until 4pm, Saturday 10am until 4pm and Sunday 11am until 4pm. Last Admission is at 3.30pm. Admission charges are £3.00 for non-members of the Association and free entry for members. To find out further details about the Heritage Centre’s feature exhibition or Dambusters Ball event visit the what’s on guide or email: [email protected] or call 01427 610526.

The Gainsborough and District Heritage Association was created in 1994 and is a registered charity (no.1077538) and celebrated its 21st Anniversary in 2015. The Gainsborough Heritage Centre situated on the corner of North Street and Spital Terrace works to preserve the history of Gainsborough as well as the surrounding villages. (The Old Post Office, North Street, Gainsborough, DN21 2HS). The Centre is volunteer led and encourages people to research and gain a further understanding of the history of Gainsborough. Fundraising is essential for the Centre in order to maintain the up-keep of the building and the facilities available to the public such as the archives, exhibition spaces and research library. A £25,000 grant from WREN was awarded to the Centre in 2016 to create the ground and first floor into permanent exhibition rooms. The Archive Officers and team of volunteers continue to work on a number of projects organising the storage of archival materials that have been donated to the Centre by the general public including cataloguing and digitising, as well as collecting oral histories and continuing to update the permanent exhibition spaces. The volunteers at the Gainsborough Heritage Centre work very hard to preserve, maintain and fundraise to keep a heritage museum in Gainsborough open. The Centre has recently been awarded funds from Ping to purchase new museum display cases that have added to the permanent exhibitions and now includes objects previously stored in the archives.

The Heritage Centre outcomes are:

The Heritage Centre outputs are:

Your ticket for the: Dambusters Exhibition