Glimpses of old Gainsborough
Chats with the oldest inhabitant V

Tales of the Trent Pt 2

A pleasant interview with Mr Thomas Fox, of Continuing last week’s article on “Tales of the Trent” narrated by Mr. Thomas Fox, of Albion Place, Gainsborough, I now proceed to give some of Mr. Fox’s more personal reminiscences. The last article was largely taken up with an account of the career of Captain Cracknell, who, as an old acquaintance of both Mr and Mrs Fox, and also on account of his personal worth and interest, claimed my informant’s first attention, and was consequently accorded a lengthy account. Mr Fox continued his yarns as follows:-

I once had an amusing experience on the river. I had been doing some building at Walkeringham, and poor old “Gassy Joe” did the plumbing and glazing. We finished on a Saturday afternoon and got to Stamp’s, at the Fox and Hounds, Walkeringham. We had our tools with us, and it was a relief when “Gassy” said: “We have the parson’s boat to take up from Walkerith. George Trevethick is going to lay her up for winter.” George was a builder of boats you know. Well, we got to Walkerith Ferry, and obtained the parson’s boat and put our things in. Morton was reached in due time, and Trevethick came to meet us. So, of course, we were invited in to have a refresher. We stopped a good bit, and then I went back to the boat for my tools, and I sat down right in the bottom of the boat. Poor old “Gassy” came down laughing, and when he reached the river he fell with his hands on the side of the boat, which filled with water. I was up to my waist in a minute, because I was sitting on the boat bottom. “Gassy’s” things were in the boat with mine, and when he saw his coat floating out of the stern of the boat he cried “Oh, Tom, my coat. I’ve a new diamond in my pocket.” I said “What about my tools? You have sunk us.” However, I saved his coat and diamond. Then George Trevethick came down to us. I can picture him now, poor fellow, looking o’er the wharf edge at us, and saying slowly “What are you doing? I never saw such fellows in all my life.” A droll fellow was George. He came down the steps to us, got some assistance, took hold of the boat bodily and turned it upside down to empty the water out. Then I put my tools in again. George says “There, she’s all right now. Come and let’s have the launching quart and go home.” So we went in and had the launching quart, and proceeded up the river to Lord Staith and finished up at Mrs Spray’s, at William IV, in the Mart Yard. I’ll say no more about that. 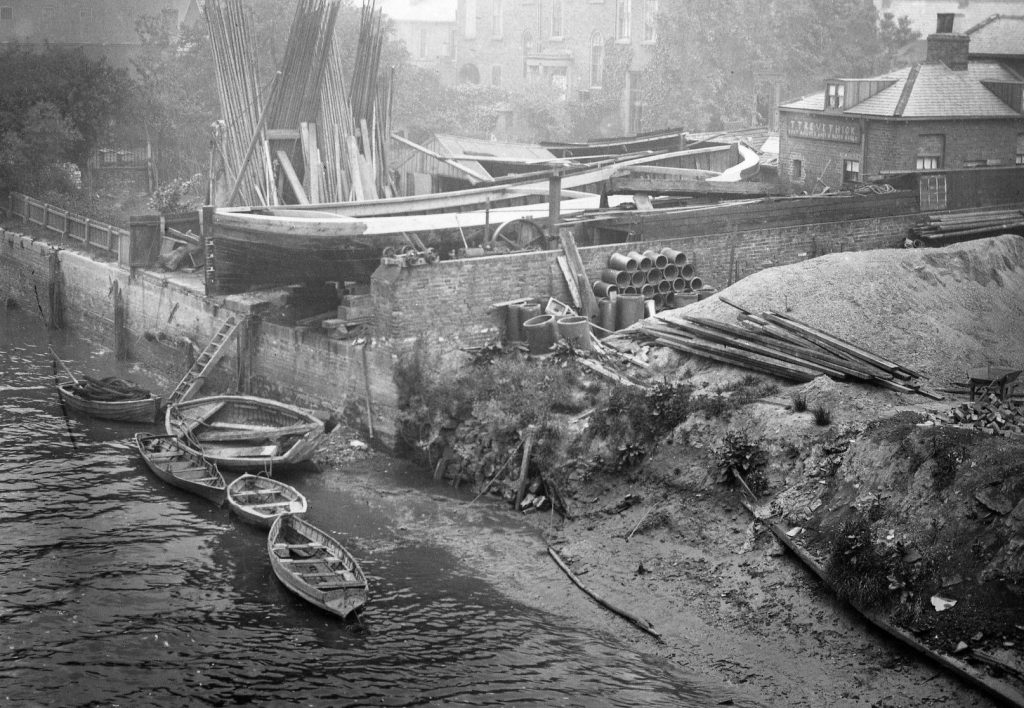 Now then I must tell you a tale about my dear old friend Bob Stewart, who died in New Zealand, poor fellow. He was always very fond of boats, and he got it into his head that he would build one. Well, he did build one, and a very beautiful thing she was, about 25ft. long, beautifully moulded, and fitted out splendidly. She had a fine new suit of sails, and Bob christened her “Arrow.” One Saturday night he invited me to go with him the next morning for the trial trip. If I would get up early, he said he would take me down to meet the aegir. At that particular time the aegir was very large, and I did not want to go with him, though I did not tell him so. Bob was so anxious about his new boat that he went off in the morning very early, , and had got down about as far as Stockwith when he met the aegir.

The tide brought him back. When he got opposite to the house on the Nott’s bank the wind went out of his sails and he could not steer. It happened that there was a large foreign brig, which had brought up a cargo of seed for Sharp’s oil mill, lying out opposite the packet wharf. As I said before, Bob could not steer, having no wind, and the tide carried him inside the brig. The brig’s hawser caught the mast of Bob’s boat and capsized her, Bob just having time to seize beneath his feet. There wasn’t a man aboard the brig knew a word of English, and they ran backwards and forwards shouting. The pilot was below getting his breakfast, and, hearing the noise, he came up and saw the state of affairs. Jumping into a boat he went and rescued Bob from his dangerous situation, though by this time Bob’s weight on the hawser had pulled the brig inshore, and he was pretty deep in the water when the pilot came to his relief. Bob had got back before I went down to the river, and when I saw him he was eating his breakfast as if nothing had happened. Nothing was heard of his boat until six weeks afterwards, when she was discovered by the captain of a keel. 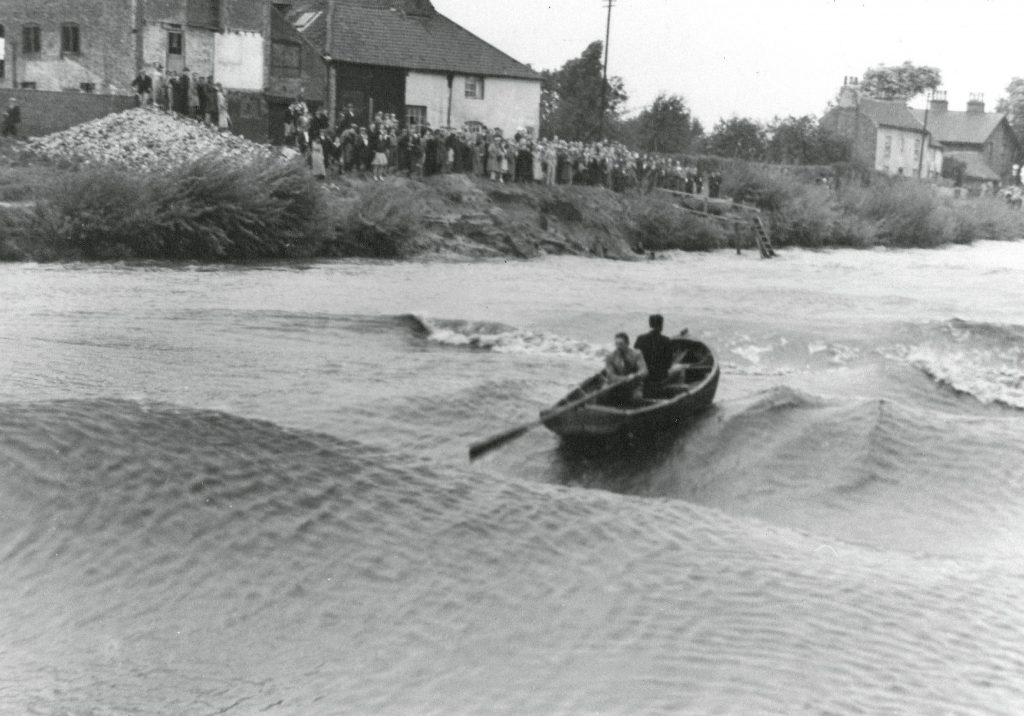 When she was got up she was perfectly unharmed except that the sails had holes in them, and not a thing was lost out of her.

“I remember I was once standing with Bob on Wright’s wharf, and we saw five keels lying abreast opposite Chapel Staith. Bob remarked how dangerous it was they should lay there in such a strong tideway. Well, I can tell you that in about half an hours’ time a man and a woman had lost their lives at that very spot. A Lincoln keel called the Victory was coming up, laden with cake at the bottom and pig iron at the top. She would have been better ballasted if the pig iron had been at the bottom. The tide brought her up with great force and carried her athwart the anchor chains of the keels opposite Chapel Staith.

In a few moments she rolled over bottom upwards, and two lives were lost. The man and a woman drowned were husband and wife, and on a visit to the captain. At the time of the disaster the woman was on the deck, and the man was below having a sleep. When the fouling took place, the woman might have escaped as did the men in charge by jumping on to the nearest keel, but with true devotion to her husband she rushed to the companion ladder to call him, and in that moment the keel overturned and sank, and she was carried down by the suction. The man’s body was recovered as soon as the keel was got up, but it was some time before they found the wife’s body. Poor things, I made both their coffins. That must be getting on for 40 years since now.

“Now, then, I’ll tell you about the most marvellous thing I ever saw in my life. Tanto Lawson called me out of bed at three o’clock one morning to make him some eel trunks. You know what they are, of course – big boxes, with holes bored in them, so that they can be put down in the water, and the eels kept alive any length of time. Well, Tanto Lawson had made a big catch of eels; all his trunks were full, yet he wanted more. So I got up when he called me, and went down Seven Foot Lane, just opposite here. It was as dark as the grave and I said, “Tanto, I daren’t go down here.” So Tanto carried me down on his back, and when they showed us a lantern at the steps, I saw such a sight as I never beheld before or since. There was a keel there, and his boat alongside it, and there were quite a ton of eels. Tanto had been fishing, and not being able to draw in his net he had to call the keel men to his assistance. The eels were lying in his boat right up to the seats across. There were plenty of them five and six pounds weight – scores, I might say. Why, he gave me 18 or 20lb. of them in a hamper for my breakfast. It was nine o’clock before I got the trunks ready, and a great many of the eels were suffocated before that time.” What a wriggling slimy mass there must have been to be sure.

“It might be interesting to some of your readers to know that I saw the Constantine steamboat, which belongs to the Steam Packet Company, launched here on May 15th, 1843. I was standing on the Notts bank during the ceremony. She ran her first journey to Hull in June, Captain Gledhill, the present manager’s father, being in charge of her. This was the first boat the Company had built here.”

Your ticket for the: Glimpses of Old Gainsborough 1894 Part Five