Glimpses of Old Gainsborough 1894 Part One

A serialisation from the Gainsborough News of the time:-

A few days ago I called at the home of Mr Charles Markham, Spital Terrace, who was reputed to be, if not actually the oldest inhabitant, at any rate the oldest native of Gainsborough still living in the town.

My object in visiting him was to cull some interesting facts from his memories of the town as it used to be. In times past I had found very great profit from visiting old worthies in town and country, and getting from their lips a real living history of events dating forward from the days of their childhood. To me it has always been a great pleasure to sit and listen to old men and women as they recounted their experiences, and occasionally moralised upon the lessons they had learned in the school of life. As I take it the wisdom of the ancients is a necessary part of every liberal education. When I have been listening to the narratives of these old people, it has sometimes happened that those with whom they were living had heard them over and over again until they knew what was coming next; but not so with the stranger, who heard many new things, and obtained side lights into Local History that had been hitherto denied him. I have often revisited a second or third time, persons whose narrations had deeply interested me. Sometimes the mist of years had gathered so thickly before their eyes that they failed to recognise me even after an interval of only two or three days. But when I mentioned a fragment of some incident which they themselves had told me, their recollection at once returned, and away they would go again, their minds revolving many things, to which their incoherent words and disjointed interjections did not always afford a complete clue. It will not be gainsaid that old folks memories are chiefly of the long past occurrences of 50, 70 or even 90 years, I have known remembered with the freshness of yesterday, while things a week ago have passed out of remembrance.

I found Mr Markham sitting in company with his son Richard, and truly I may say I never saw an old man of 89 years in the possession of more perfect faculties mental and physical combined. We had not been long together before the old man was smiling as he alluded to little boyish events of eighty years ago. I need hardly attempt to arrange the information he gave me about old time Gainsborough, for the skein is by no means tangled and the threads easy to draw.

The old man started by remembering that where the station and Spring Gardens now stand, there were formerly gardens that were let out. The site now occupied by the Temperance Hall, was once cut through by a great ditch running down to a very deep pond which was resorted to for fishing. This was called Duckle’s Fish Pond. Just on the further side of the Temperance Hall site grew a very large elm tree and as Mr Markham said “It was a pity it was cut down. There was not such a magnificent tree in the town. It hadn’t been grown in one 100 years.” At that time there was no house on the Temperance Hall side of the road, except the Old Rectory, while on the other side the house now occupied by James Marshall was the only one then built. 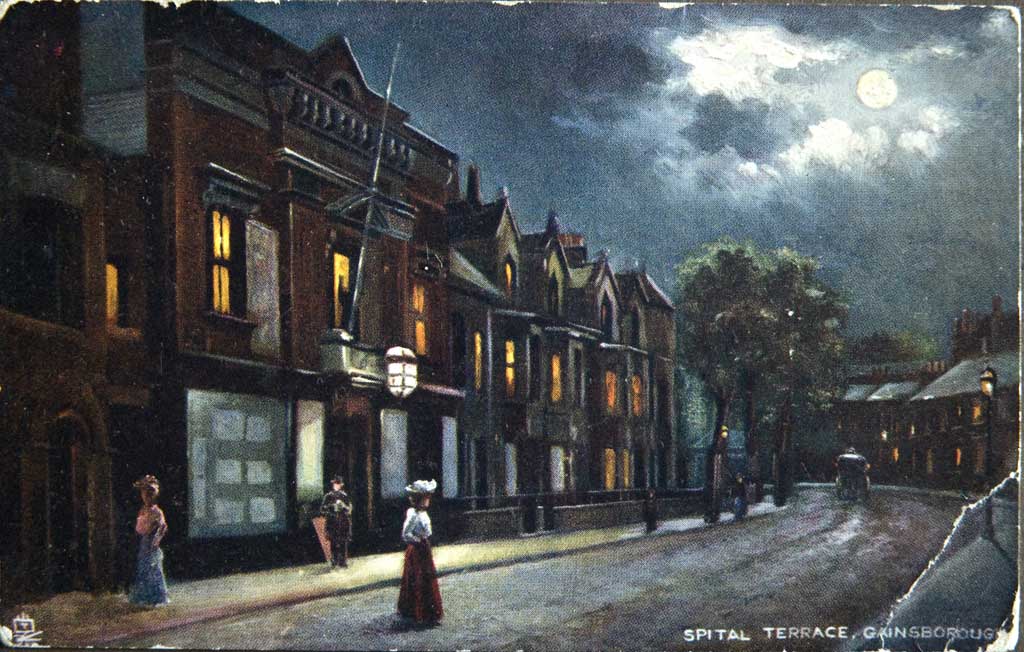 Mr Richard Markham here observed that within his recollection there was hedge covered in summer with white convolvulous, running along where the Police Station stands.

The father, returning to the subject of the pond in Duckle’s Close, remarked gleefully that he had slided on it many a time. Duckle’s house was formerly called Lay Rectory. He spoke of a riot that was raised against a man named Barnet, whom the people accused of having sold his daughter to be taken to America. They nearly killed him. Barnet’s house stood where the railway station does now, and was the only house above Spring Gardens.

Here the son observed that he remembered seeing the riot out of the bedroom window. He was then quite a child.

The father, continuing said, Barnett would have been murdered that night, as sure as he was born, if he had not managed to escape. He then spoke of a Ropewalk which ran from Taylor’s house at the corner of Cross Street and along were the police station and Catholic Chapel now stand, and right up to the entrance in Spring Gardens. The ropery belonged to a man named George Smith.

Mr Richard Markham remembered Van Hamburgh having a circus in an open paddock where the house of Mr T N Taylor now is. He also recollected the Spital coach running up the terrace, which was then a main road.

Then, between father and son, it came out that, from the house were Mr T Rhodes once lived going down Beaumont Street and Trinity Street there were only two houses little old fashioned places, until the Union was reached. The land was occupied for market gardens and in Rooks garden the old Spa House stood. A murder was once committed in spa house but not within memory, and in the age of superstition, the spa house never did much business afterwards.

In Rook’s garden too a man hanged himself in a pear tree, and the tree was cut down as a deodand (an animal or article that, having been the immediate cause of the death of a human being, was forfeited to the crown to be applied to pious uses). The boys of this period seized upon the fallen trunk, and drew it about the streets calling out “This is the tree that a man hanged himself on”. Where Marshalls offices stand there was a row of magnificent horse chestnut trees extending as far as Pingle Hill.

The father said he remembered the Bluecoat School being built. The building was now owned by Messrs Marshall, one of whose foreman, recently deceased lived there. The master of the Bluecoat School was one Hebblethwaite who followed Stevenson, a man with a curious gait, whom the thoughtless children used to designate ‘Old Stinkum Shaky Leg’. Mr Markham went to the school himself. Only 21 or 22 boys were allowed there then, and £5 premium was given when a lad was bound apprentice.

My informants father received £5 for his son. There was an inscribed tablet on the front of the building setting forth that Miss Hickman, the lady of the manor, had given that house and the land for the purposes of a Bluecoat School. The inscription is now however erased. The house stands opposite the Unitarian Chapel.

Mr Markham proceeded “I remember the old workhouse being in Church Street. Old Mrs Barnaby kept it. George Barnaby and I were in London at the same time. He lived in a house in Fleet Lane now Fleet Street. The Old Workhouse, after being disused, was turned into a prison (a fact which Mr Richard Markham said he could well remember, for his uncle, who was a constable, once took him to see a man who was in custody for breaking into a house on Whites Wood Lane). Today the premises are used as a Joiners shop.

In the days when the town was lighted by oil lamps a man called King was leased of the lamp lighting. At that time all the lamps were stored in the Old Hall in the very apartment now used as a reading room. The Old Hall at that time was let out as tenements and warehouses. The kitchen was used as a plasterer’s warehouse.

Mr Richard Markham said he had seen the old smoke jack in the kitchen of the Old Hall, while Mr Markham senior, said his father’s grandmother remembered a woman known by the name of Polly Whigs and Plum Cakes (Whigs being the name given to plain cakes), who was servant to the last of the Hickman family living at the Hall. Continuing the father said there was formerly a dial on the west gable of the Hall, in good condition, but it had been allowed to go to decay.

Speaking on the old days of coach travelling. Mr Markham said he remembered Old Dakin’s van, which used to go to Lincoln, a coach or two that went from the Monson’s Arms to Sheffield and Musborough, and the mail coach which ran to Spital. He saw the first steam boat on the Trent. It was called the Caledonia, and he remembered as a lad running fit to break his neck to see the ship that had come up the river with a chimney for a mast. That would be about 80 years ago.

There used to be a very large trade carried on at Gainsborough in ship building, and there was an extensive ropery in connection with the industry. Pointing out the back-room window he said “All this place was occupied by pigsties, right away as far as Spital bridge. There was only the Parish Church in the town in those days. Trinity Church was not founded.

At Southolme there was a noble, beautiful pond, and I was once playing ‘Snakes March’ with some other lads, when they swung me in up to my middle. I can remember the stoneyard, lately occupied by John Needham, and now by Mr Chadwick, when it was a three cornered field, producing a crop of rye or wheat. The bottom of Spring Gardens was a field where I have played and gathered greensauce many a time. There was an open drain in Church Street at the part called Tinker’s Bridge. I remember we had to cross it to get into my father-in-law Lambert’s garden. The drain was near the old workhouse. There have been many wonderful alterations since I can first remember the town. I can indistinctly remember a portion of the moat which surrounded the Old Hall. We boys have played in the moat. 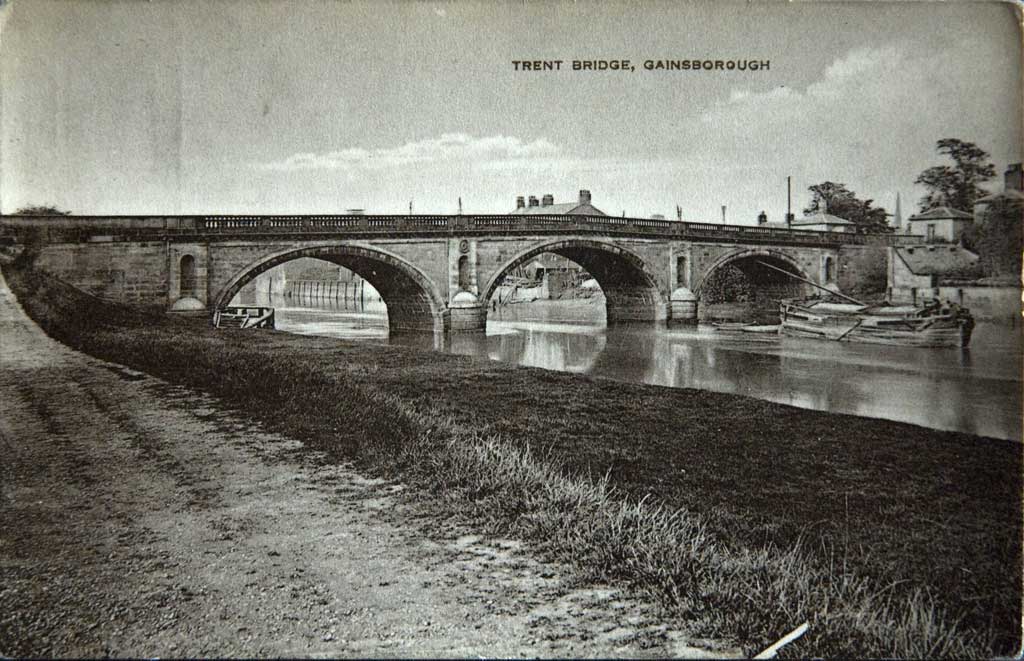 In concluding my visit to Mr Markham and Mr Richard Markham, the older gentleman told me that on the very day his father came to Gainsborough the foundation stone of the Trent Bridge was laid. Having thanked both gentleman for their information, and undertaking to call again I departed.

Your ticket for the: Glimpses of Old Gainsborough 1894 Part One

Glimpses of Old Gainsborough 1894 Part One