In the first interview with Mr Charles Markham of Spital Terrace, the oldest inhabitant of Gainsborough. I gathered many facts that were interesting especially to residents of the town. When I paid him a second visit, I found that his memory had been revived, and he discoursed to me of noted characters and events of old time Gainsborough with a zest and warmth that were contagious. Those reminiscences I am convinced, will be relished by all who read. My informant who is now in his 90th year, sparkled with highly entertaining anecdotes some of which called the visible faculties into violent exercise. Many of these stories are placed in my notebook with the intention of retailing them, though it is impossible to put in print an adequate picture of an old man when he is living the part o’er again. 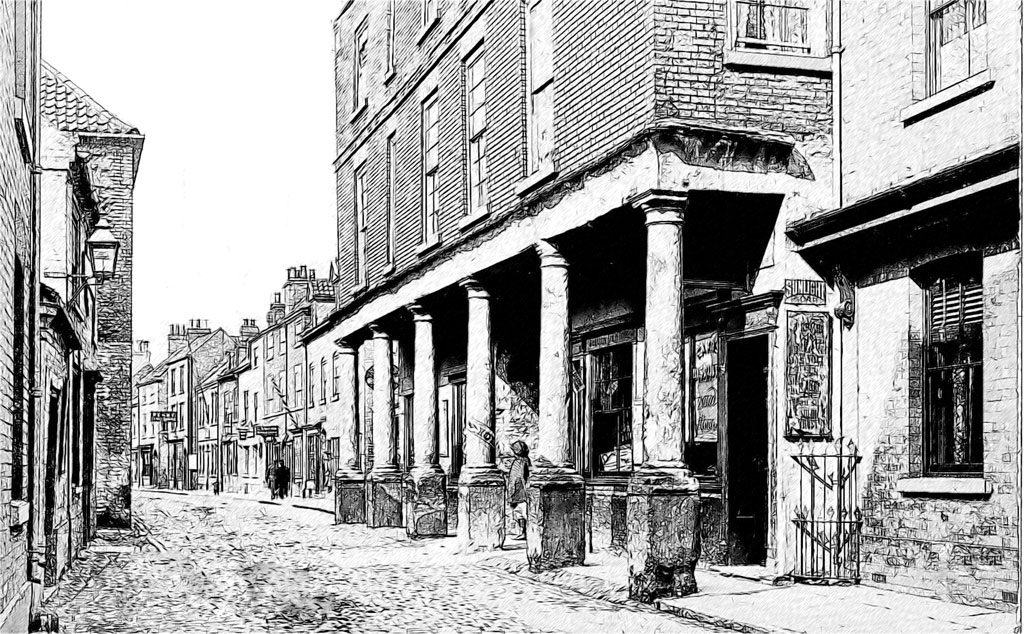 “You know” said he “the old pillared house in Bridge Street; I remembered it when the windows were filled with stained glass blazoned with coats of arms. The glass was removed and all trace of it is now entirely lost; so that it is impossible to learn the history of the house, or even to discover the names of the great families who once resided here, and whose arms I have seen. I remember the lowering of the road through Spital Hill. The work was done by labourers under a man named Hardy, and no engineer took part in its accomplishment. There used to be a toll bar on the Spital Road; and at the foot of Cox’s Hill, close to where the Spital Terrace railway bridge now is, grew a magnificent Elm tree. Old Askew cut it down.

I saw, Etherington’s warehouse burnt down on the spot where the Baltic Mill now stands. I was present when the front wall came crashing down. Fortunately it fell inwards; had it come out it would have smashed old Jerrem’s house and some others. There was one consequence of that fire which makes it a memorable event of my boyhood’s days. Some casks of playing marbles had come up the river and were stored in this warehouse. After the fire, I and all the boys in playing about the ruins became possessed of a tremendous quantity of these marbles, and by this piece of good luck we were placed beyond the reach of anxiety for some time to come.

Mr Markham proceeded, “I remember the old workhouse being in Church Street. Old Mrs Barnaby kept it, George Barnaby and I were in London at the same time. He lived in a house in Fleet Lane now Fleet Street. The old workhouse after being disused was turned into a prison (a fact which Mr Richard Markham said he could well remember, for his uncle, who was a constable, once took him there to see a man in custody for breaking into a house in Whites Wood Lane). Today, the premises are used as a joiners shop. In the days when the town was lighted by lamps, a man called King was leased of the lamp lighting. At that time all the oil lamps were stored in the old ball in the very apartment now used as a reading room. The Old Hall at that time was let out in tenements and warehouses. The kitchen was used as a plasterers warehouse.

Mr Richard Markham said he had seen the old smoke jack in the kitchen of the old Hall, while Mr Markham, senior, said his father’s grandmother remembered a woman named by the name of Polly Whigs and Plum Cakes (Whigs being the name given to plain cakes), who was servant to the last of the Hickman family residing at the hall. Continuing, the father said there was formally a dial on the west gable of the hall, in good condition, but it had been allowed to go to decay. Speaking on the old days of coach travelling. Mr Markham said he remembered old Dakin’s van, which used to go to Lincoln, a coach or two which went from the Monson’s arms to Sheffield and Musborough, and the mail coach which ran to Spital. 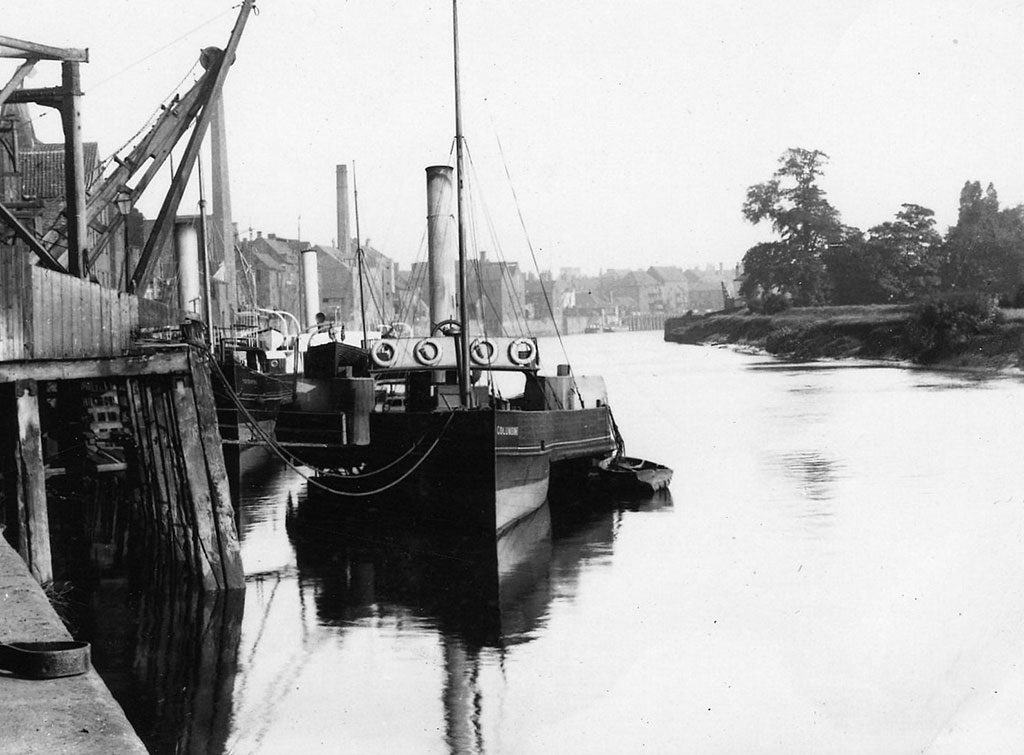 Not the Caledonia but Steam Packet Columbine at Packet Landing

He saw the first steamboat on the Trent. It was called the Caledonia, and he remembered as a lad running fit to break his neck to see the ship that had come up the river with a chimney for a mast. That would be about 80 years ago. There used to be a very large trade carried on at Gainsborough in shipbuilding, and there was an extensive ropery in connection with the industry. Pointing out of the back room window he said “all this place was occupied by pigsties, right away as far as Spital bridge. There was only the Parish church in the town in these days. Trinity Church was not founded. At Southolme there was a noble, beautiful pond, and I was once playing “snakes March”with some of the lads, when they swung me in up to my middle. I can remember the stone yard, lately occupied by John Needham, and now by Mr Chadwick, when it was a three cornered field producing a crop of rye or wheat. The bottom of Spring Gardens was a field where I have played and gathered greensauce many a time. There was an open drain in Church Street at the part called Tinkers bridge, and I remember we had to cross it to get into my father-in-law Lamberts garden. The drain was near the old workhouse. There have been wonderful alterations since I can first remember the town. I can indistinctly remember a portion of the moat which surrounded the Old Hall. We boys have played in the moat.

In concluding my visit to Mr Markham and Mr Richard Markham, the older gentleman told me that on the very day his father came to Gainsborough the foundation stone of Trent Bridge was laid. Having thanked both gentlemen for the information and undertaking to call again I departed.

Your ticket for the: Glimpses of Old Gainsborough 1894 Part Two