Glimpses of old Gainsborough Chats with the oldest inhabitant IV.

Tales of the Trent A pleasant interview with Mr Thomas Fox, of Albion Place, Gainsborough, to whom the reminiscences of “our oldest inhabitant” formed a ready introduction, yielded me pabulum for what I hope will be an interesting column. An acquaintance of considerably over 40 years of the Trent and its traffic, has given Mr. Fox a close acquaintance with its history. Nor is this all, for it was Mr Fox’s fortune to marry the daughter of a Trent skipper, and she can remind him of a great deal that is slipping from his memory through the flight of years. 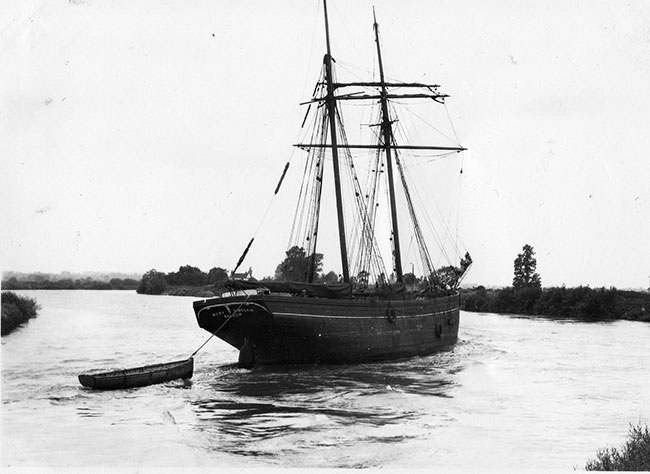 No further preliminary is therefore necessary, and Mr. Fox shall begin his story by giving some glimpses into the life of a thorough going sailor, a native of the town. Said he:-

“Captain Cracknell, whose portrait I will show you, is a man of whom Gainsborough may be proud. He was born in Hickman Street here, and his father was a waterman. He has been 56 years on the Tyne service, and is now living at Newcastle in semi-retirement, though he has not actually severed his connection with the firm under whom he has served so many years. He was over at Gainsborough to see us a few months ago.”

Here Mrs. Fox informed me that Capt. Cracknell’s parents occupied the house next door to her parents. Her father was for a great many years a trader on the Trent, and plied to York, Doncaster, and Lincoln. He always went by the name of Captain Laughton. Mr Fox here showed me the promised portrait of Captain Cracknell, with which was framed a brief biography. To show his chequered experience, I cannot do better than quote Captain Cracknell’s own words:-

“My memory carries me back many years. It might amuse the younger generation to hear how sailors went dressed in my early days. Well, let me give you a picture of myself when I first became the sailing master of a ship over 50 years ago (this was said in 1892). When I rigged myself out in my go-onshore togs, I put on a pair of white duck knee breeches, stamped with a foul anchor at the pocket flaps, white stockings, and pumps that you might have shaved yourself in the polish on them, a blue satin waistcoat embroidered all over with flowers, a fancy print shirt, and a short cloth shell jacket with a man-ofwarsman’s collar to it, while a glazed tarpaulin hat set rakishly on my head crowned the lot.

That is the costume I was married in, except that I substituted a swallow-tail coat for my jacket, and a top hat for my tarpaulin. Heaven bless me, how much smarter we old salts looked in such a rig out than in the blue cloth and brass buttons we wear nowadays”

Certainly for brightness and general picturesque effect, the worthy captain has good cause to
lament the degeneracy of the present times. A few more particulars respecting this amusing captain will not be unwelcome, and so I quote the Captain’s log, as follows:-

“Well do I remember the first ship I sailed in. She was a brig called the Newark, belonging to Gainsborough, and the master’s name was Swift. He was different from the general run of coasting skippers then afloat. We had prayers on board twice a week. I sailed with that man for a good many years, and indeed I became seaman, mate, and master in the same employ. I entered the Tyne Steam Shipping Company when it was first formed. On the 25th May 1853, I wrote my first log as a captain in the service of that partnership, and have sailed under the same flag ever since. During my 39 years of service (1892) I have made the passage from the Tyne to London 3,500 times, and reckon that I must have carried above a quarter of a million souls, with never once a mishap worth noticing in the whole period.”

When Captain Cracknell first went before the mast, his suit of clothes was a very simple matter, consisting all told of a pair of coarse canvas trousers worn next the skin, and a canvas jumper. For ten years shirts were a luxury he “did not aspire to”. In this primitive garb, he once had a terrible experience of the North Sea, for during a storm on the longest night of the bitterest winter (1847) he ever remembered, he was washed overboard, but miraculous to relate, the returning wave carried him back on to the deck. His canvas suit was frozen as stiff as boards and the shock of the icy-cold sea he has not forgotten to the present day. “But” adds the Captain in relating this experience, “sailors then were a very different class of men to what they are now. We used to do more daring deeds in my young days.” A genuine sea-dog is this captain, and there is in his composition that weakness for the marvellous so characteristic par excellence of sailors. His experience is certainly notable in this respect, and withal most melancholy. “In a dream of the night,” while a heavy storm was in progress, he saw the ship Inchultha, commanded by his son, and the waves careering over her, until finally she was engulfed. He saw his son, swathed in oilskins, perish in the angry deep, and starting up in affright, he rushed to the mate on the bridge, exclaiming frantically, “ My boy is drowned! My
boy is drowned!” Strange to say, neither his son nor the ship he was in were ever heard of afterwards.

After these reminiscences, first amusing and then melancholy, of his old friend, Mr Fox went on to relate to me some of his experiences on the Trent.

“It was a Christmas Eve, about 1860 I think, Christmas Eve fell on a Tuesday, and it had been the weekly market at Gainsborough. The market packet had landed its passengers at Keadby in the evening, and was returning, but the frost came down so severely that it stopped her, and she was frozen up in the river. It was the sharpest frost in my lifetime. The Hull packet was coming up the river, and she was frozen fast too; and both packets remained ice-bound for weeks.

“I remember the old Union, a steamer belonging to Gainsborough. She was blown up at Hull, and I knew a man who was aboard when the explosion occurred.

“I have seen some rare ‘games’ in the town with the captains. The Colchester and Ipswich men always used to come up and down the Trent, and the principal cargoes used to be cheese. The Damson and Eagle from Ipswich never brought much of anything else but cheese. We used to have thousands of tons of cheese landed here. The river used to be very busy, but the railway knocked it all off. The railway here was made some 46 or 47 years ago. Gainsborough was an important place before then, and was made a port in 1841 I think, but has long ceased to hold that distinction. I have heard, though it is not within my memory, that at a warehouse above here, Smith’s used to kill beef and pickle it to send to the Greenlanders.

“My acquaintance with the captains on the river began several years before I was married, and on our wedding day, happening to be well known to all the captains in the river at the time, they every one flew bunting in honour of the occasion. That was on August 18th 1853. Captain Titterton, who commanded the Eagle, and lived in Hickman Street, left the river with all his bunting displayed. It was his last voyage, poor fellow, for his vessel
was lost off Cromer with all hands. That was not a pleasant beginning, was it?

“I remember a steam tug that once brought some keels up from Hull. The crew of the tug went ashore for some “’lowance,” for there was a lot of drinking in those days. They had dropped a kedge anchor overboard on the Notts side of the river, and gone ashore in their boat. As they did not anticipate remaining away long, they left the donkey engine pumping water into the boiler. The steam-valve chanced to be a bit loose, and the vibration of the engine shook the steam on, and the vessel began to move, dragging her anchor. Some spectators ran into the public house and informed the crew that the steamer was off up the river without them. By the time the crew started in pursuit of the runaway in their boat, she had passed under the bridge, luckily without striking one of the piers, but her masts were snapped off by the arch. Before the crew overtook her, and got her under control, she had travelled from the Baltic Mill some 600 or 700 yards up the river.”

Here for the present I must stop, but next week I hope to continue Mr Fox’s “Tales of the Trent”

Your ticket for the: Glimpses of Old Gainsborough 1894 Part Four