6th May 2018
No comments yet
Heritage Articles, News

Roy Bucknell was born in 1935 at Thonock Hall near Gainsborough which was once a Georgian mansion and the ancestral seat of the Hickman and Bacon families from 1714 (now demolished, the Gainsborough Golf Club is now based where the Hall was situated). Roy lived at the Hall with his father James and his mother Olive who worked as the Butler and the cook to Sir Hickman Bacon and Roy lived there until he was in his late 20s.

Photo below shows James and Olive Bucknell with their son Roy at Thonock Hall. 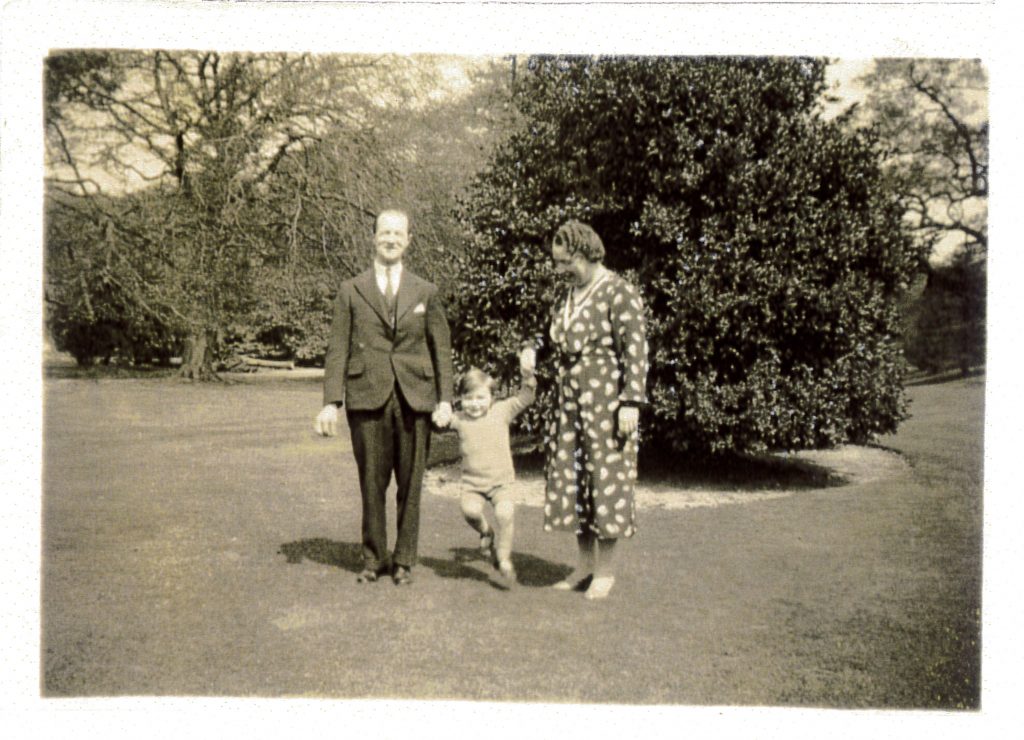 Roy attended both Morton and Ropery Road Schools and worked at Pumfreys starting as an apprentice joiner before becoming Local Works Manager until the firm closed. He then worked for Ping for a period of time.

As a child he lived, explored and investigated Thonock Hall, a building no longer in existence. Roy recalled how the Hall consisted of around 64 rooms with a Servants Hall, the Butler’s Pantry where his father spent a lot of his time as well as the cellar where he remembered seeing a coffin stored for many years that was made for Sir Hickman Bacon. However, when it came to his funeral in 1872 a new coffin was designed specifically for the occasion. The servants worked by candlelight as there was no electricity at this time. The Hall had a large coal house as the method of heating used was coal and coke with the use of paraffin lamps. As part of his father’s role as a Butler he would light the paraffin lamps and this would give light to the different rooms in the Hall. ‘The Hall had running water because they had a big err tank right in the roof at the top of the I mean it was four or five storeys up and they used to have a big pump that pumped the water up out of the lake right up to the top.’

His father’s role working at Thonock Hall as the Butler included organising all of the drinks and setting tables up immaculately. This included serving drinks and meals to Sir Hickman Bacon who was the only person that he had to look after for the majority of the time, but on occasions he would also serve guests. Once the meals and drinks were served he would bring the dishes down to the kitchen where Roy’s mother worked as the cook and cleaned the dishes. The housekeeper’s role would include organising the laundry, completing the washing and making the beds. He recalled Mrs Challis who was the housekeeper at Thonock Hall and how he used to play cards with her during the evenings. 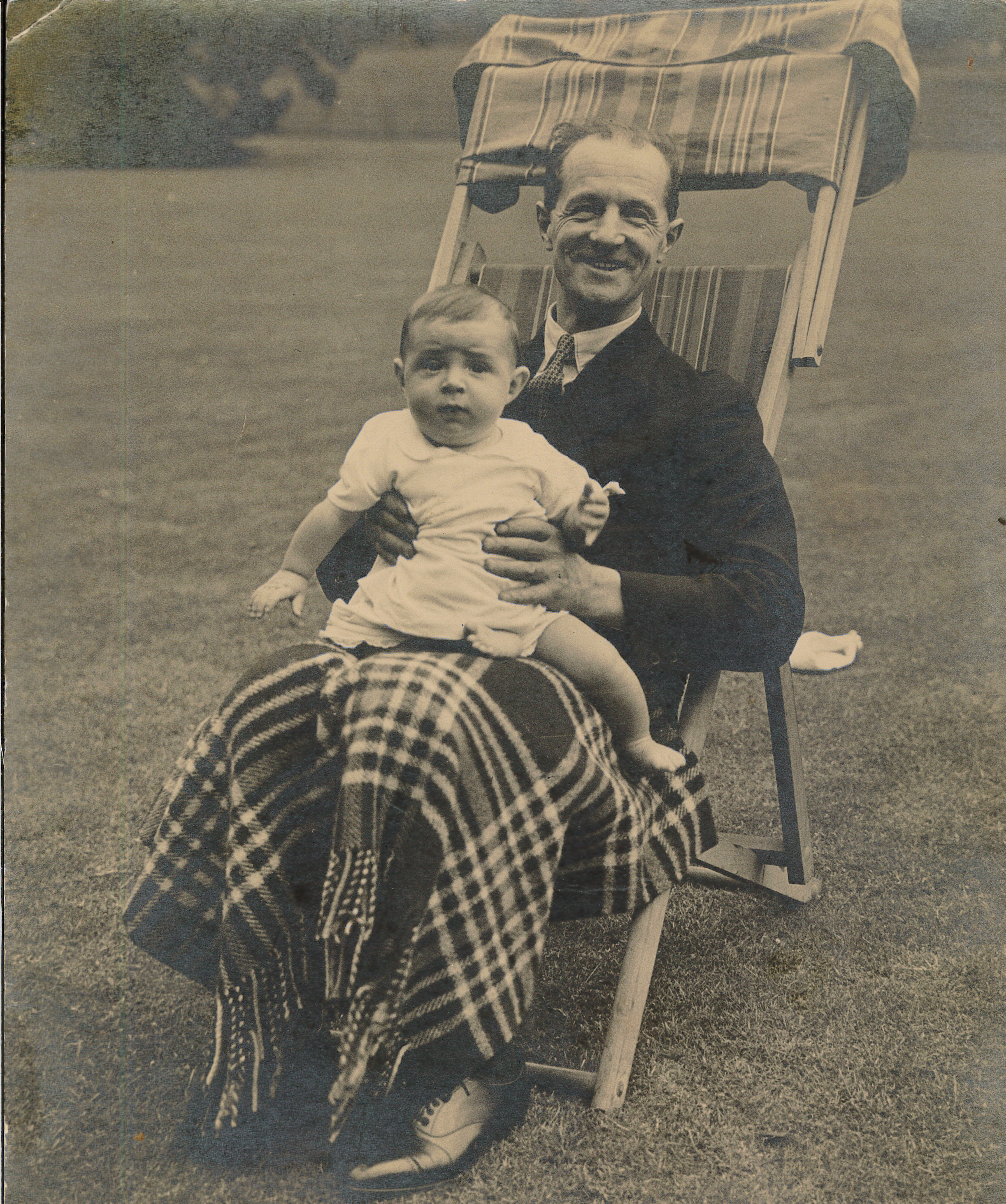 The Hall included a snooker room and a library which was huge and Roy explains, ‘all the way round was as high as you could get was full of books and then a corner there was a part that could open and it was an escape route.’ The escape route led to the front door with a concealed exit where a button could be pressed to open the door and escape into the entrance area of the Hall. ‘There was thousands and thousands of books in there, it really was huge – the library but um yeah there was some rooms that were absolutely full of paintings and pictures […] There was one big painting on the wall where someone had sat there with a dog and when you walked up the staircase the eyes seemed to follow you as you went up the staircase and that was a bit exciting and then in the same place in this hall there was a big gong that my father [the Butler] used to ring when the food was ready you know he hit the gong and set it off, yeah but err yeah some of the houses some of the rooms upstairs were full of absolutely crammed with stuff.’ 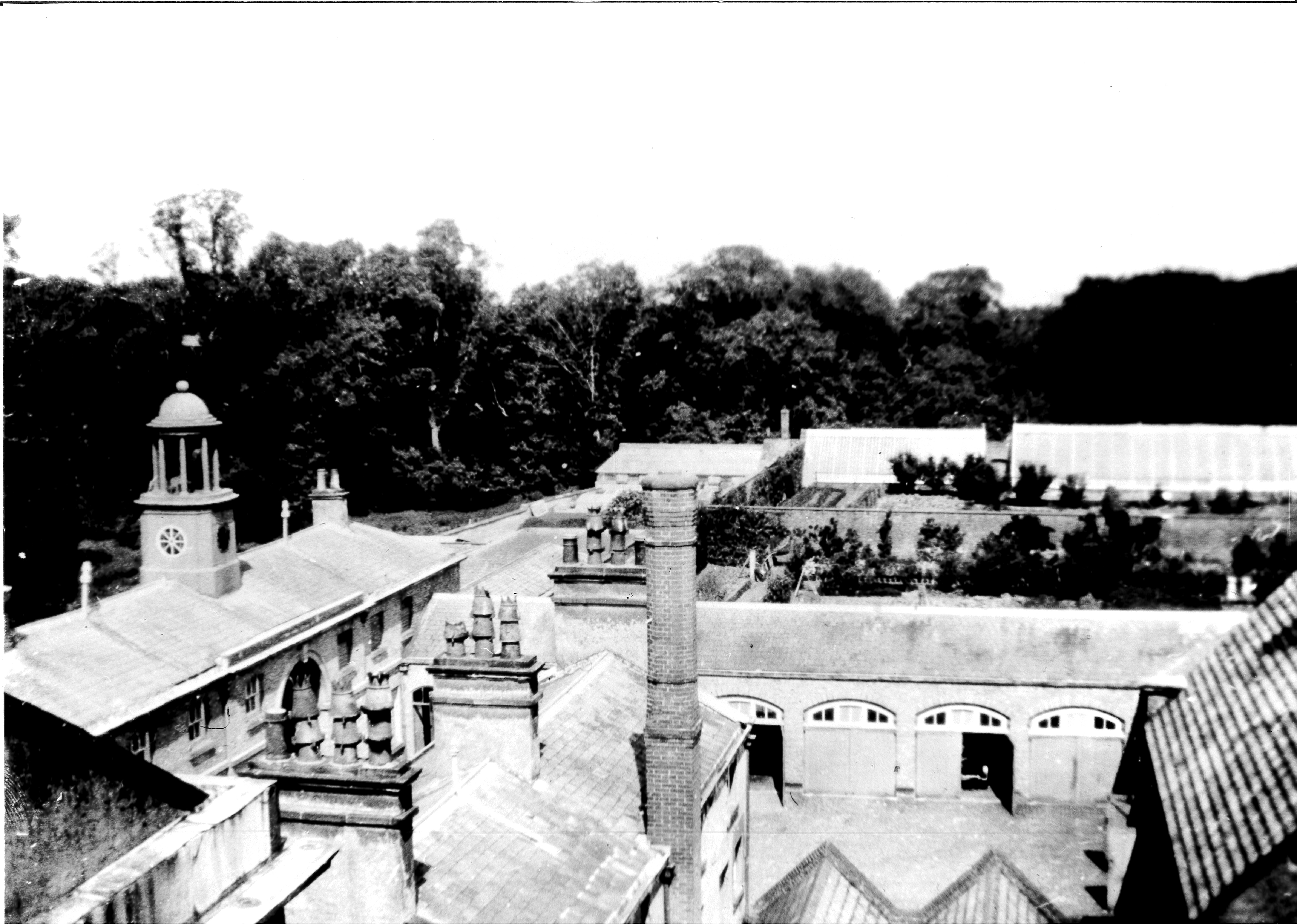 ‘They used to have a big dining hall and big cellar where they stored things. We used to have a big thing to store eggs in, put salt water in and put the eggs in, store about 10 dozen eggs in there and err and I say my mother used to cut bread and put it in front of the oven in a big thing so it rolls with the yeast and things like that.’ The kitchen had a big oven about 20 foot long inside where meals had traditionally been cooked and baked however, they didn’t use that particular oven when Roy lived at the Hall. Roy recalls the kitchen and how his mum ‘used to pickle onions and fruit and stuff like that but there was quite a lot of big rooms that we actually used ourselves and I used to keep a little rabbit and things like that but err it was a very enjoyable life and err a bit lonely at times but I used to get friends come up, playmates and things like that. I used to do a bit of fencing, sword fencing and things [laughing].’ The Gainsborough News reported in 1953 how Olive Bucknell had prepared meals for over 30 people including the staff and her family when the Royal Show was held at Lincoln.

The Bucknell family used to live upstairs in ‘quite a nice room where Mrs Challis used to be so that’s the room where we used to stay at night and things and then there was my dad’s pantry as I said we lived in there as well.’ 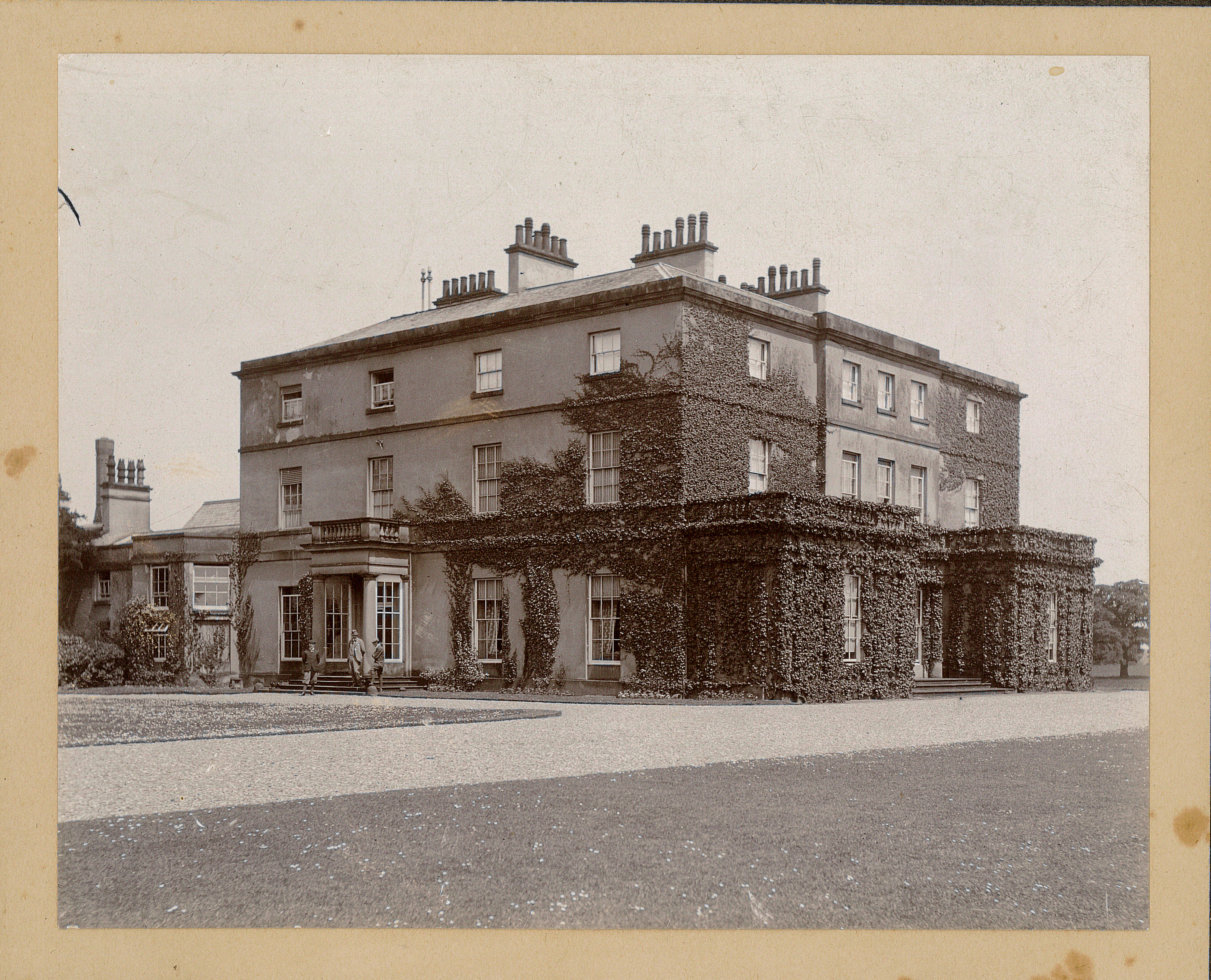 Roy remembered during the Second World War how a group of refugee children from London came to live at the Hall as well as some of the Army for up to two years. He recalled how when the Army stayed he was given a plastic aeroplane by one of the men. The Hall had a big lawn and lots of places for the children to play, however, the area is now all grown up with trees but ‘in the middle of the lawn there was a little lake and I was in the lake one day with one of the refugees in a little bath you know it was the round bath and it tipped up and I fell off and I’d managed to grab hold of the bank and this refugee run in and fetched my dad and he come and pulled me out so I was lucky really.’

Photo below shows Roy on the first left with a group of refugees who lived at Thonock Hall during the War. 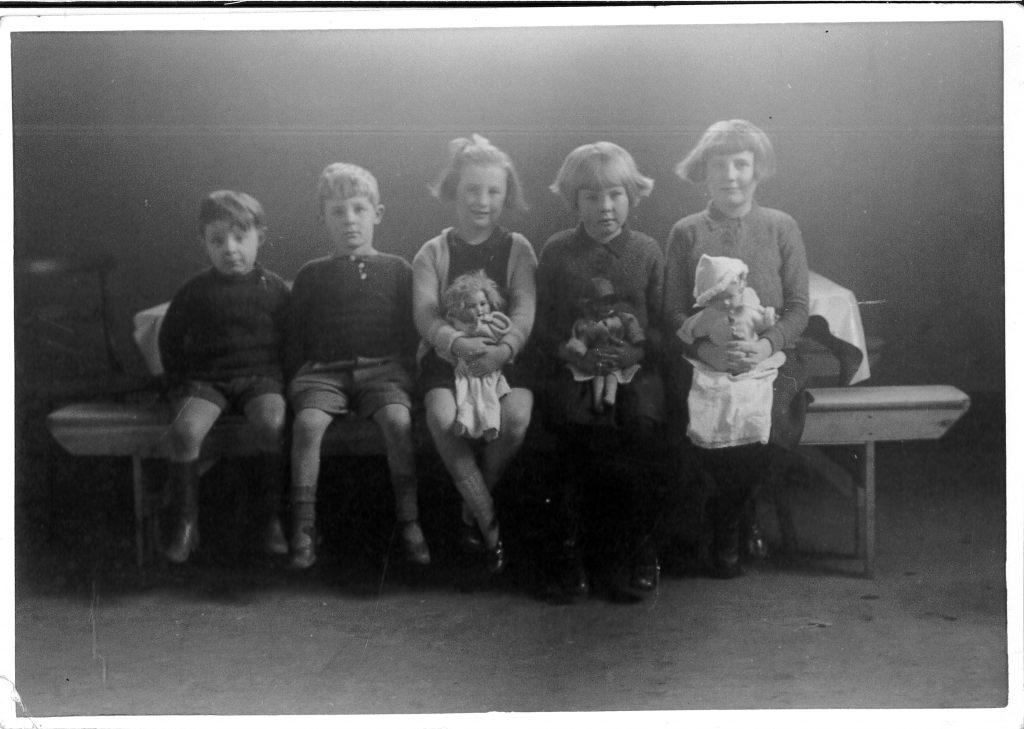 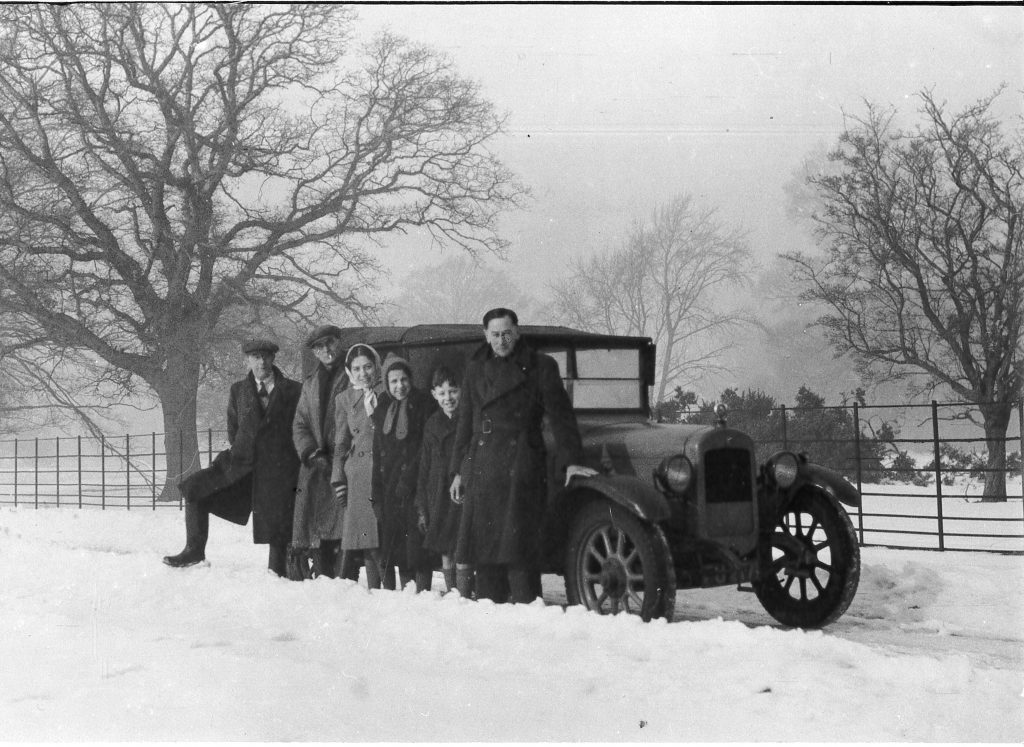 Roy enjoyed his time at Thonock Hall and was sad at the loss of this building when it was demolished in 1964 as the Hall was his birthplace as well as where his parents were employed and where he lived through his years growing up near Gainsborough. In 1953 it was reported in the Gainsborough News that Olive Bucknell then housekeeper was moving with her family and Sir Edmund and Lady Bacon to their new residence, “Ash Villa” on Morton Terrace. She is quoted as saying how when employed at Thonock Hall that, ‘I have always enjoyed good health and good walking.’ She said that was a great thing as far as her job was concerned, with the number of steps she had to go up and down and the long passages she had to walk along so often. She also said she would find a big difference with no steps and passages in her new home. ‘Mrs Bucknell said she was always very happy at Thonock Hall in spite of the fact that there were no modern amenities.’

Your ticket for the: Memories of Thonock Hall with Roy Bucknell