Would you take one look at the painting below and say that this man was once a local banker and entrepreneur in the eighteenth century? 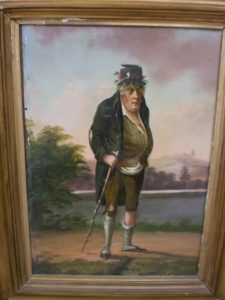 Well… you may be surprised as this painting by an artist called Mr Dennis, a ship’s painter by trade shows Joseph Hornby, who was once an influential figure in the town of Gainsborough. The painting shows an eccentric looking gentleman standing in a landscape comprising a lake, hills, and trees. Holding a stick and wearing a battered top hat decorated with foliage and a clay pipe, his shirt unbuttoned and one stocking tumbled to his ankle, his appearance was that of a vagrant.

Joseph was baptised in Gainsborough Parish Church in November 1729. His father, also Joseph, was a mercer. According to local resident Charles Marham (interviewed by the Gainsborough News in March 1894), Joseph was always a curious creature:

I can just remember old Joe Hornby. William and Joe Hornby were bankers. Joe was always eccentric. He was once dining at a gentlemen’s house in the days of his prosperity, when a plum pudding was put on the table, Joe was known to be very fond of plum pudding, but on this occasion the company was amazed when he took out of his check a quid of tabacco, laid it upon the pudding, and exclaimed ‘Pudding, thou art mine.’ He spoke the truth, for after Joe had marked the pudding for himself, no-one else wanted any. Some big bank failures in London brought about his downfall, and I have seen old Joe Hornby sitting on a doorstep eating a raw red herring.

In Our Old Town (1857) Thomas Miller’s written description and dedication of three pages to Joseph correspond with the painted portrait:

For years he had wandered about Our Old Town, with his darned hose ungartered, and hanging about his heels, the tie of his neckerchief sometimes under one ear, his waistcoat unbuttoned, and his crownless hat, worn the wrong side uppermost, and nothing between his grey pate and the sun and rain. If you said to him, ‘Why do you wear your hat upside down?’ he would reply, ‘Because the world’s upside down with poor Old Joe. That poor crazed man was once the great banker of our old town, and had occupied the finest modern mansion in the market place. He failed and never looked up afterwards. His hard hearted creditors even took the gold mourning ring he wore in memory of the beautiful young wife he had lost. He became a poor harmless idiot who lived on the charity of a little industrious old woman that had once been his cook.’

Miller was a very young child when Joseph passed away and, writing over forty-five years later, may have formed his description of ‘Old Joe’ from oral accounts or familiarity with the portrait. Further research revealed the existence of three similar portraits from the one at the Museum of Lincolnshire Life also unsigned and undated held in the Gainsborough Old Hall’s collections. The Gainsborough Heritage Centre has also acquired a further example, (shown above) and also hold a nineteenth-century postcard version of one of the portraits in the Old Hall’s collections. This, along with several published nineteenth-century accounts of his life in local history books, suggests ‘Old Joe’ was a well-known and popular character, even many years after his death. 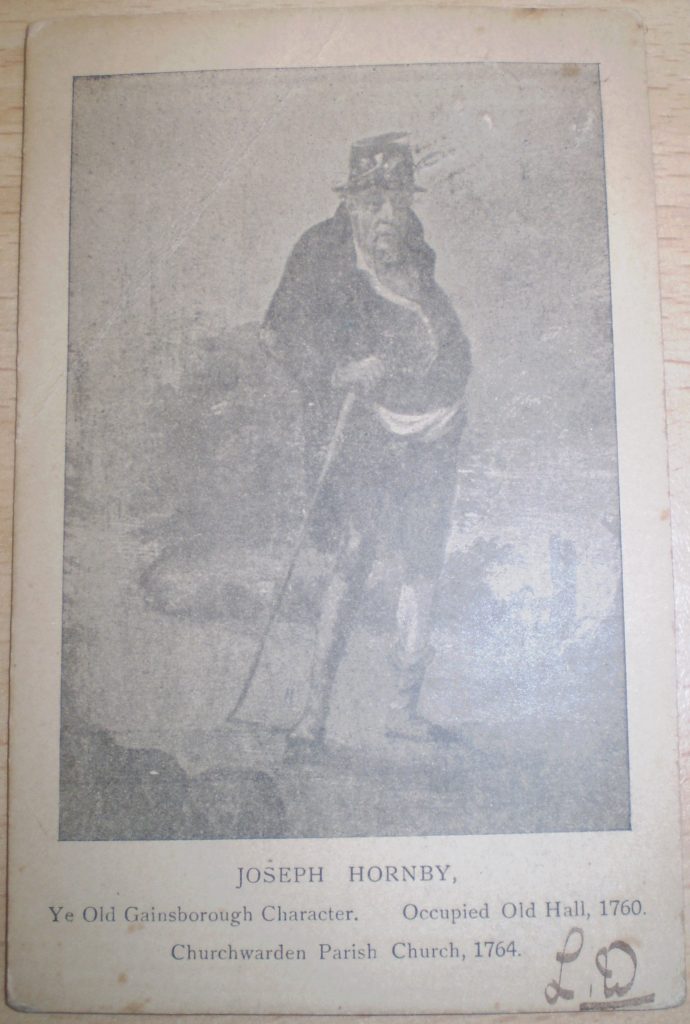 A nineteenth-century postcard version of one of the portraits in the Old Hall’s collections (held by the Gainsborough Heritage Centre).

According to Stark’s History of Gainsborough, written thirty years after the former bank situated in Bridge Street was occupied by Hornby. He states, that it was home to ‘a most eccentric character, Joseph Hornby, well known to everyone connected with this town at that time, and of whose eccentricities many curious stories are still repeated. One of these is perhaps worth noting, for the readiness with which he could take advantage of circumstances to push trade. Being at Sleaford in the course of a journey for orders, he happened to be in what used to be known as the tradesmens’ smoking room, when one of the party began joking Joseph upon his running about for orders – some sixty years ago not so general a practise as at the present day – and his readiness to engage to supply almost anything – even coffins.  Joseph defended himself as he best could – told the party he was always happy to take orders from good men, and jocularly asked if he might send him a parcel. By way of joking Joe, “Oh yes.” Said he, “send me a gross of coffins.” “Thank you,” said Joe, books the order, and no more was said, except that by way of preventing the possible completion of the order, it was to be delivered within a certain time. Joe, however, was not to be thus defeated, at the time fixed there were the gross of coffins, with a handsome letter, begging the party’s acceptance of one over for himself. On his death-bed the medical gentleman who attended him, in warning him of the danger of his situation, pressed the necessity of repentance.  “Ah,” said Joe, “I once committed one horrible sin, which I have had no opportunity of amending, – I turned the direction post to Corringham, and sent many unfortunate creatures to Kirton instead!” the late Mr Dennis painted a number if excellent likenesses of Joseph, some of which are still to be met with. The misfortunes of William Hornby, his brother, who adventured into the banking business with £100,000 in hard cash, in hand, and by over confidence in one house sank more than the whole, subsequently becoming bankrupt, reduced poor Joseph to great distress.’

William Hornby, brother of Joseph was a partner in the bank of Hornby, Esdaile and Raynes, which opened in a building on Bridge Street in January 1791. The building was once William’s home and a stone plaque, which reads ‘I & W Hornby, 1762’ can still be seen above the doorway. Hornby and Esdaile were made bankrupt in May 1803; meetings were held in the White Hart Inn on Lord Street to audit the accounts and pay creditors. It was said the bank’s collapse was caused by the failure of a London bank, which Hornsby and Esdaile were involved in, and it brought a great loss to many people including Joseph. 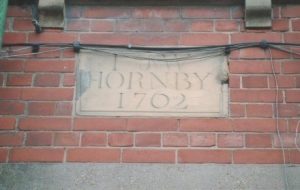 Stone plaque over the door of the former bank

Reported in the Lincolnshire Chronicle on 6 January 1940 mention is made from the office of Mr. C. F Richmond, solicitor, of the discovery of a number of bank notes issued by the Gainsborough Bank conducted by William Hornby and Sir Joseph Esdaile. These were guinea and five guinea notes, and in the top left hand corner they bore a representation of the Gainsborough toll bridge. Each had a serial number and carried the signature of one or both proprietors.

On the back of the banknote is this endorsement:

Exhibited to us under a Commission of Bankrupt against William Hornby Esq. & Sir Joseph Esdaile Knt. Thomas Brooke, William Barnard

William died in poverty in Doncaster in 1805. Joseph, who had once lived in a grand house in the Market Place, was cared for by an elderly lady who was once his cook in more prosperous times. He died in July 1811 and was buried in the Parish Church in the town where he was so celebrated.

The painting of Joseph Hornby is on permanent display at the Gainsborough Heritage Centre and can be viewed at the Museum of Lincolnshire Life and the Gainsborough Old Hall. If you would like to find out more about this story then please visit the Heritage Centre collections, or view the Lincolnshire County Council’s online cultural collections database Lincs to the Past that can be accessed at www.lincstothepast.com

Article courtesy of Sara Basquill the Collections Development Officer for Lincolnshire Heritage Services published in the Lincoln History and Archaeology Society magazine (No.111, Spring 2018) pp 16 – 17. Click on the article old joe to view. Many thanks to Rosemary Speck the Archives Officer at the Gainsborough Heritage Centre for her research.

Your ticket for the: Poor Old Joe Hornby