In 1813, thirteen years after the appearance of Wharlton’s little book, Adam Stark wrote, printed, and published, the first edition of his History and Antiquities of the Town of Gainsburgh, a volume of some 372 pages, with four illus­trations, a map and a genealogy of the Hickman family; its list of 174 subscribers includes many names familiar still to the student of Gainsborough history. Twenty-seven years later Stark followed it with a second, enlarged, and much revised edition, 630 pages long with both full-page and vignette illustrations. If Wharlton’s work has curiosity value, here with Adam Stark we have something very different – a work of real history, a work (one could almost say) of scholarship which no historian of Gainsborough can ignore. Adam Stark was an Edinburgh man born in 1784, the second of nine children and said to be the son of an architect. After being in partnership with his cousin as a bookseller in Edinburgh, Adam Stark reached Gainsborough via Manchester, Hull and Lincoln, taking over the Gainsborough business of Henry Mozley when the latter removed to Derby in 1815. He was soon involved in the life and affairs of this busy and important inland port and market town, associating himself with many organisations, serving on the committees of some, and as the local correspondent for the Lincoln, Rutland and Stamford Mercury – at that time a regional newspaper of no mean importance – sent reports of their activities for publication in its pages. 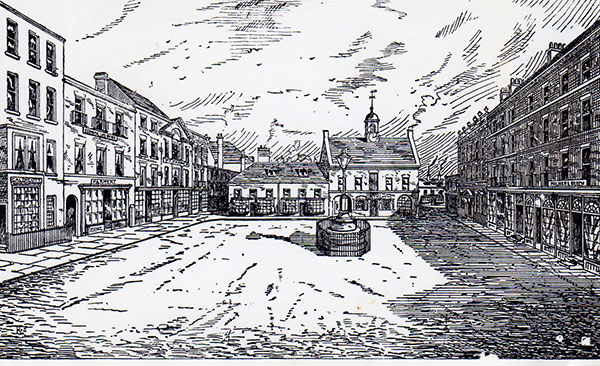 As well as being a stationer and printer, newsagent, reading-room proprietor, and patent-medicine seller, Adam Stark was also in his time the Gainsborough Postmaster and a stocks and shares broker. How he found time to research and write, within a couple of years, a history of his newly adopted town which still bears critical scrutiny after 170 years, is a mystery; to then follow it up with an enlarged second edition (an even more standard work on the town than its predecessor) while engaged in all his business and public activities is quite amazing. Nor is this the end of his literary activity, for he had, before coming to Gainsborough, founded newspapers in Hull and Lincoln, written and published a history of the latter city, and while in Gainsborough compiled his Visitor’s Pocket Guide to Gainsburgh and its Neighbourhood (1840), based on his histories, wrote The History of the Bishopric of Lincoln (1852)-a substantial volume in which he elaborates his theory, advanced in the first edition of his history of Gainsborough, that Sidnacester, the ancient seat of the Bishopric of Lincoln, was located at Stow. Beyond his Lincolnshire writings, he wrote for private circulation in 1822 a short work on Stonehenge, and in 1855 his Printing: it antecedents, origin, history and results was published; neither of these works, however, are regarded very highly by present-day scholars.

But whatever his other achievements, it is Adam Stark as an historian of Gainsborough that is our concern – and not only as the author of printed histories, but as a collector of materials for local history. Among his papers deposited in the Lincolnshire Archives Office is a manuscript history of Thonock, and notes and transcripts of material on several other villages in the area from which he had hoped to write histories particularly (as he wrote in 1843) Morton, Walkerith and East Stockwith. He was ‘an industrious antiquary’ who, without access to the range of national and county records available to present-day scholars, sought out old manuscript material and records held locally and from them, and from his observations of life in the town in his time, wrote histories of a very high standard for his day, so much so that Gainsborough must have been the envy of local historians in many larger and, perhaps, more important towns.

Harriett Mozley was a sister of Henry Mozley (1773 to 1845), a printer in the town (and later in Derby) whose large and varied output was an important contribution to the provincial book-trade. Of Stark’s several children his son, John Mozley Stark, took over his father’s printing and bookselling business but in 1846 sold out to his assistant William Hargrave Caldicott. J. M. Stark was later a noted printer and bookseller in Hull and printed, among other things, his father’s History of the Bishopric of Lincoln.