The Twilight of the Mills – Gainsborough Artists Big Task

Our contributor, Mr K S Wood, of the Studio Gainsborough has set himself the task of painting pictures of all the windmills in the country. His only means of locomotion is a pedal cycle and recently he made a fortnights tour on his machine through eight counties, painting views of roadside mills. In this and future articles he tells of some of his experiences. The title of this article is that of a book on windmills, which Mr Wood is writing.

The extraordinary interest of the public in the windmills from the use of which the modern science of engineering developed has led to me being asked to give an account of my most recent trip on a pedal cycle in search of these fast passing relics of the past. Why pedal cycle? so many ask. Why not a motor car? Chiefly, I will reply, because I have learnt that unless one works for a thing it is scarcely worth the having. Then, the exercise keeps one fit, one sees the country, one can get to places impossible to the motor car; and several other reasons.

Well it so happened that set off at 6-30a.m. the first day of the recent heat wave. To be at Newark just after eight o’clock, attired for a cycling holiday (shorts, and all that) observing most folk about to commence their days work, seemed as pleasant as the gradual slipping away of consciousness under an anaesthetic. From here my course lay along the Great North Road, the finest road in the British Isles. Between Long Bennington and Foston I met a ‘hiker’ who was walking from London to York. He had started on Sunday, and was walking lame, and had apparently averaged 30 miles per day. What struck one, already, was the greenness of the countryside. I have never seen such a green August the trees seemed to be exactly as they were in June. Grantham by 9-30, over what I have seen described as the steepest gradient on the Great North Road, but which I believe to be excelled by the hill south of Grantham, over the G.N.R south of Grantham, over the G.N.R. bridge. I rode the first but could not manage the second. The country here is very charming. Colsterworth was my first objective, so I turned to the right just after the railway bridge, seven miles from Grantham, and painted my first subject. 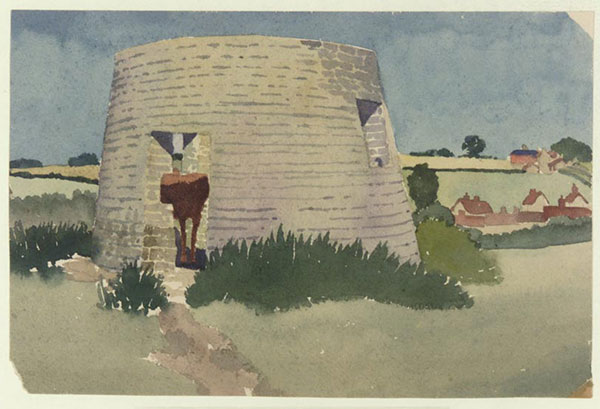 This was the remains of a well-built stone tower mill, in which a horse was sheltering from the sun, now growing fierce. The other mill of the village has left no trace.

South Witham, where there was a typical Lincolnshire mill, in ruins, next claimed my presence, followed by a Wymonham, where the mill and cottage made a pretty group. Here the heat was excessive, and I began to realise that Sol cannot treat everyone alike with his favours, for his rays decidedly did not suit me. The road now took on a bad surface, and here I will remark on the state of the roads of the eighteen counties through which I rode. In the ‘Gainsborough News’ of August 17th, 1928, there is a note that Leicestershire was the worst county (for road surface) of any which the writer had to traverse, and it still maintains that unenviable position. It is, in fact, worse now than then; or it was on this particular day. For more miles I rode on a surface scattered with broken pebbles, each covered with an oily black liquid, which spurted up my stockings, in my shoes, in the innermost parts of my cycle (and my shorts).

This was a main road, and when a motor car or lorry passed, the shower of stones even flew down one’s neck. When this disagreeable experience was over, the roads took on a peculiar flinty unevenness that never see in counties other than Leicestershire. In 1928 I praised Lincolnshire roads and still do so, with more emphasis than then, for they have much improved, quite 40 percent, and I can truly say that I know of no other county where the least frequented by-roads can be found with such good surfaces. Nottingham, of course, is ahead of most counties, and Somerset and Gloucester are good. Devon is not so satisfactory, though Cornwall is better than one expects. But to return to our muttons. The bad roads of Leicester then had at least an end, and I found, after all, that even they could be ameliorated by the sight of the magnificent church of Queniborough, after painting the mill at Ashby Folville. Barnsby’s and Syston’s mills have left no traces. The city of Leicester saw me at 5 p.m., and here I stayed my first night.

Off by eight o’clock, on the Fosse Road now, to Broughton Astley, Sapcotes and Sharnford, where not one of the mills formerly there have left any remains. When I was young, I often heard, after a statement, the phrase “Well, I‘ll go to Hinckley” for which town, some folk substitute “blazes”. Here I was then anxious to see what Hinckley was like, as it was so distinguished, and must confess the town might just as well have been Gainsborough or Newark. Here one
gets on to the Holyhead road, a splendid highway. My side of it was pale pink, the other half was brilliant blue, and for miles this two coloured ribbon stretched before me, its peculiarity being due to the fact that one half (my half) was in Warwickshire, and the other in Leicestershire. But it was a good surface and did not run streams of tar, though it was the hottest day of the year.

I turned off at Caldecote hill and painted the mill on the top after an al-fresco lunch on a canal bridge, and a really painful toil up a grassy, but glass sprinkled hillside.

Here it was frankly too hot to finish the subject entirely, so I left it when I had got the chief features done. The heat literally dried the paint on the brush before it could be got properly on the paper. Baxterley was the next place, where a splendid old post mill, gaunt and bare awaited my attentions. A nearby cottager kindly allowed me to sit in her garden, and gave me spring water to drink in copious measure.

The next place for a mill was Little Payton, where there was the lower part of a tower mill, and where the spring water turned to homemade ginger beer. I seemed to be in luck, especially as they brought me a seat to sit on into the bargain.

From Karl Woods, Twilight of the Mills

Your ticket for the: The Twilight of the Mills – Gainsborough Artists Big Task

The Twilight of the Mills – Gainsborough Artists Big Task