In the Association’s last blog post we shared some photos of objects from the archives and invited you to solve the mystery! Here are the answers and some more information below. 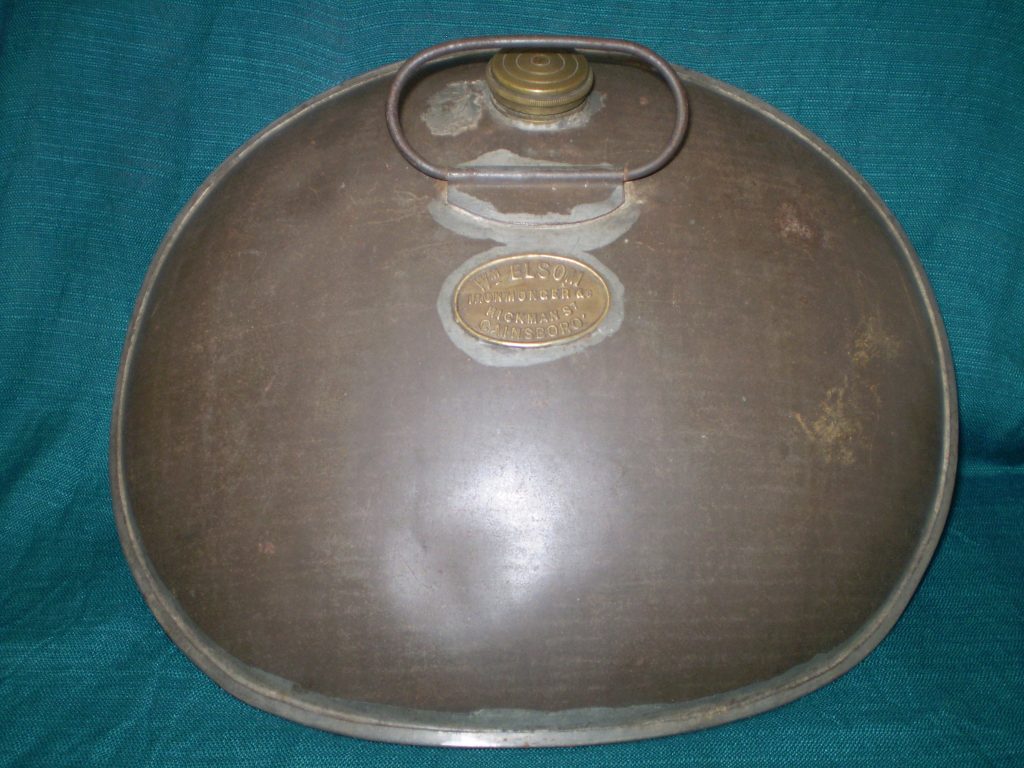 A bed warmer or warming pan was a common household item in countries with cold winters, especially in Europe. It consisted of a metal container, usually fitted with a handle and shaped somewhat like a modern frying pan, with a solid or finely perforated lid. The pan would be filled with embers and placed under the covers of a bed, to warm it up and/or dry it out before use. As you can see this bed warmer was produced on Hickman Street in Gainsborough and would have been filled with hot water. 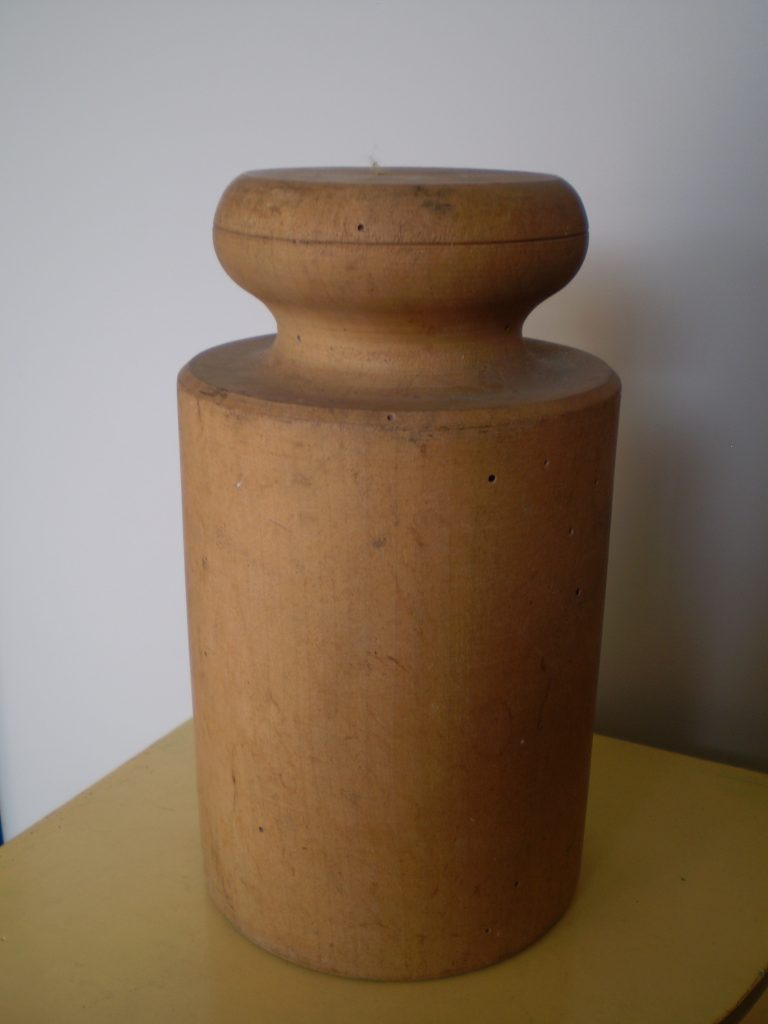 A pork pie is a traditional English meat pie, served either at room temperature or cold. It consists of a filling of roughly chopped pork and pork fat, surrounded by a layer of jellied pork stock in a hot water crust pastry. Traditional pies use a mix of fat and cured meat, giving the filling a pink colour. They are often produced in moulds or forms, giving the outside of the pie a very regular shape. 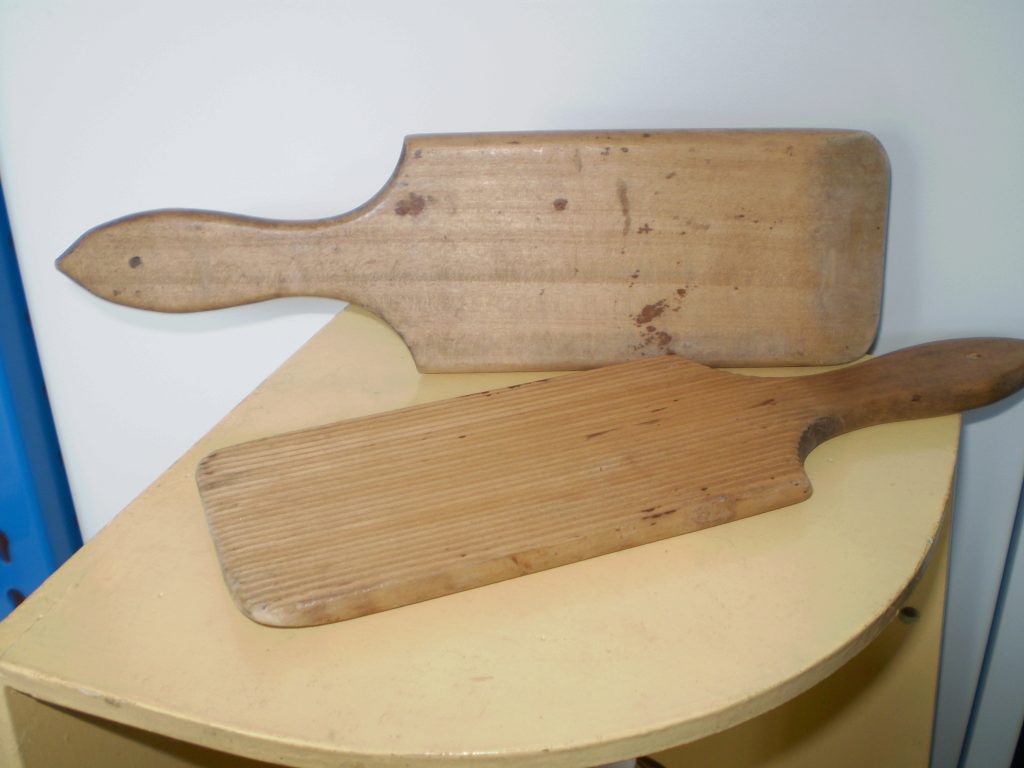 Butter was made from the cow’s milk on the farm. Once the milk had been churned to form butter it was then patted into shape but hands would make the butter melt so wooden hands were made. It turned out to be quite a skilful job and involved quite a bit of dexterity. In the United States and many parts of Europe, butter pat plates were primarily used in the 1800s and into the early 1900s in the homes of affluent citizens who had elaborate dinnerware sets for formal dining. Each dinner guest was given his or her own butter pat plate on which to put a pat (or lump) of butter. 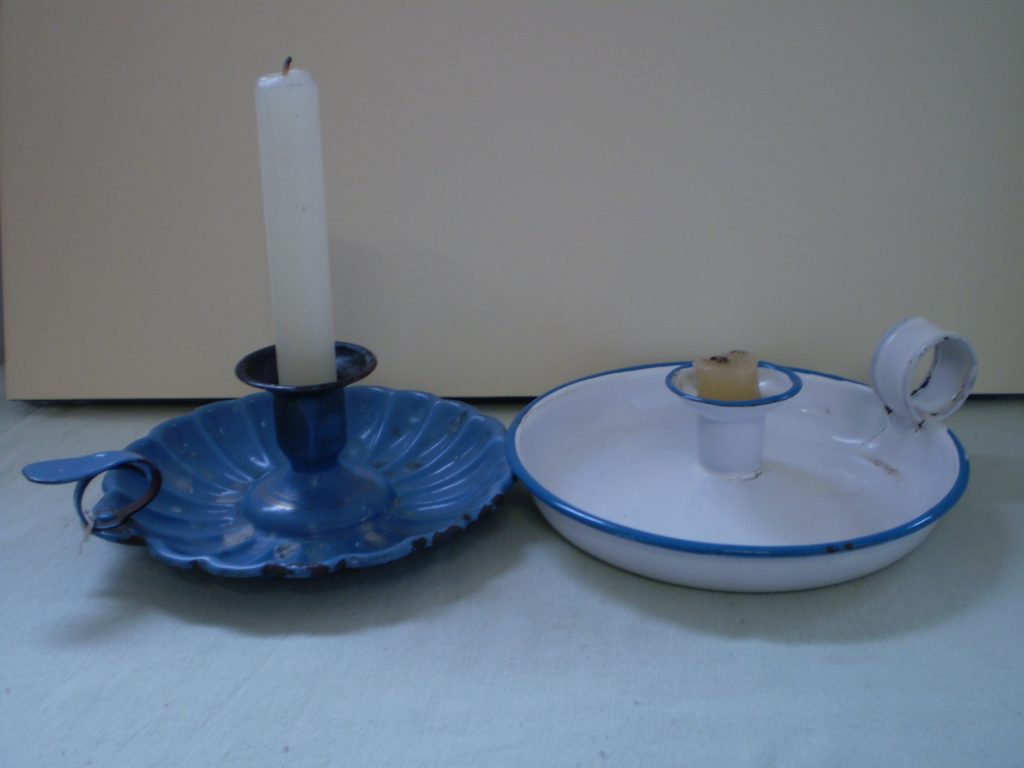 Most of the major developments impacting contemporary candle making occurred during the 19th century. In the 1820s, French chemist Michel Eugene Chevreul discovered how to extract stearic acid from animal fatty acids. This led to the development of stearin wax, which was hard, durable and burned cleanly. Stearin candles remain popular in Europe today.

In 1834, inventor Joseph Morgan helped to further the modern-day candle industry by developing a machine that allowed for continuous production of moulded candles by using a cylinder with a movable piston to eject candles as they solidified. With the introduction of mechanized production, candles became an easily affordable commodity for the masses.

Paraffin wax was introduced in the 1850s after chemists learned how to efficiently separate the naturally-occurring waxy substance from petroleum and refine it. Odourless and bluish-white in colour, paraffin was a boon to candlemaking because it burned cleanly, consistently and was more economical to produce than any other candle fuel. Its only disadvantage was a low melting point. This was soon overcome by adding the harder stearic acid, which had become widely available. With the introduction of the light bulb in 1879, candlemaking began to decline.

A Meat Mincer is a small home appliance for grinding meat and turning it into more or less homogeneous mass — forcemeat. A meat mincer is a kitchen appliance for fine chopping and/or mixing of raw or cooked meat, fish, vegetables or similar food. It replaces tools like the mincing knife, for example, which is also used to produce minced meat, filling, etc. Often used by those who make their own meat ingredients for sausages or meat dishes. Meat Grinders are a common utensil for grinding a variety of ingredients that may include seasonings desired for personal tastes in the foods being prepared.

The invention of the grinder was in the 19th century through the work of German inventor Baron Karl Drais. Traditional mincers are manually operated, made of cast iron and are built to be clamped to a counter or table and hand-cranked to grind two to three pounds of meat per minute. 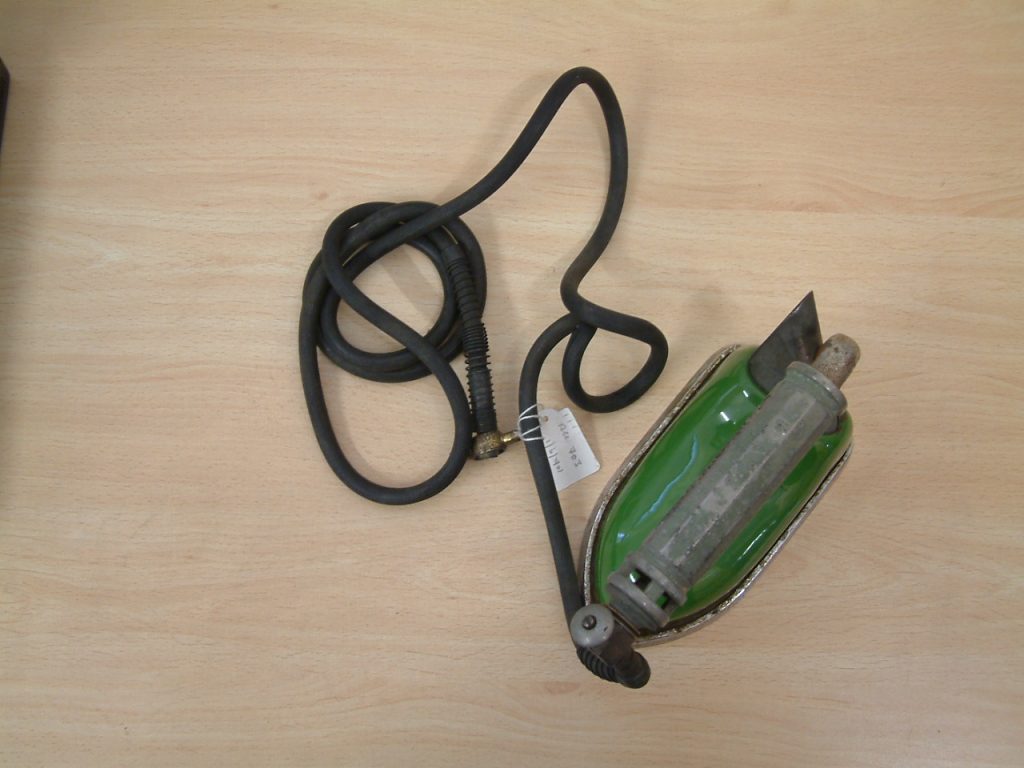 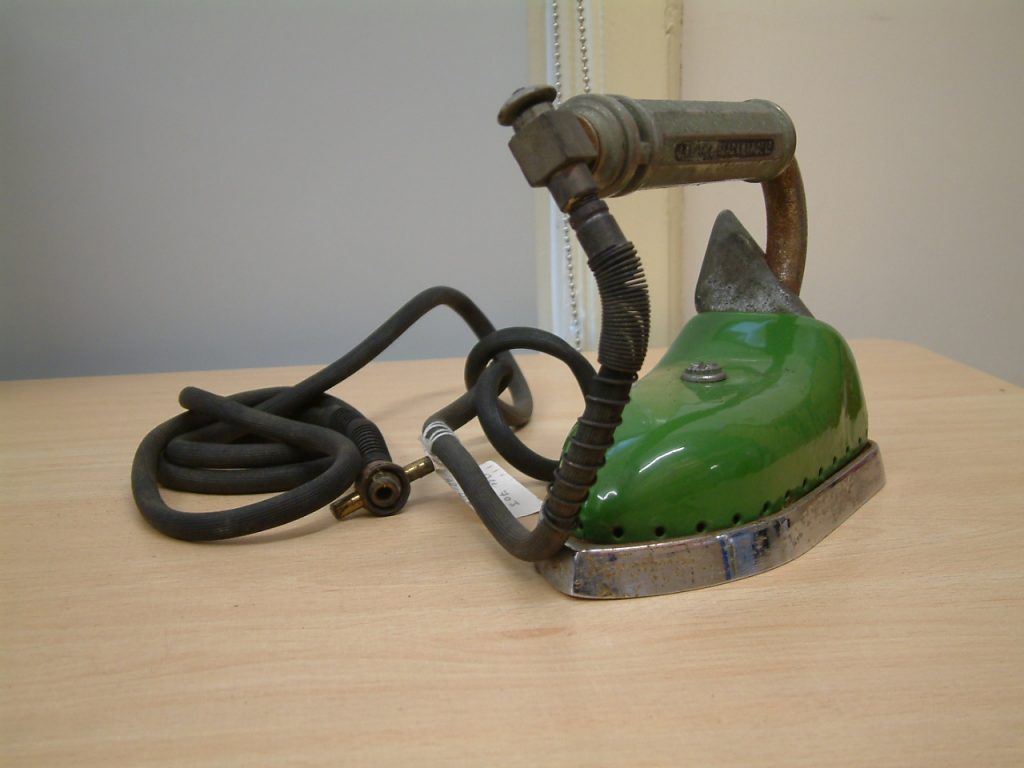 The gas iron is an adaptation of a simple iron which was heated on a coal fire. The model is known as a Hot Cross iron. By making the iron hollow on the inside the gas flames could be fed by a tube to heat the iron from within.

Ironing used to be even harder and more tiring work than it is today. Fabrics like wool, linen and canvas are much harder to press than today’s lighter and often synthetic fabrics. Early irons were very heavy. Victorian irons were metal and heated on stoves, but in the 1940s the iron used gas to make it hot. This was more efficient, as the heat was more controlled and consistent, but the iron was still very heavy.

The gas was attached to the iron from the domestic gas supply through the tap and tube at the back of the iron. There are two rows of six jets inside the body of the iron, and gas flowed from these jets, which were then lit. This heated the metal base, making it hot enough to press out creases.

It was a design challenge to protect the user from burning their hands as the iron heated up. A thick black metal plate bolted over the green enamel element kept the heat away from the user, and the handle is made of plastic, which does not conduct the heat. 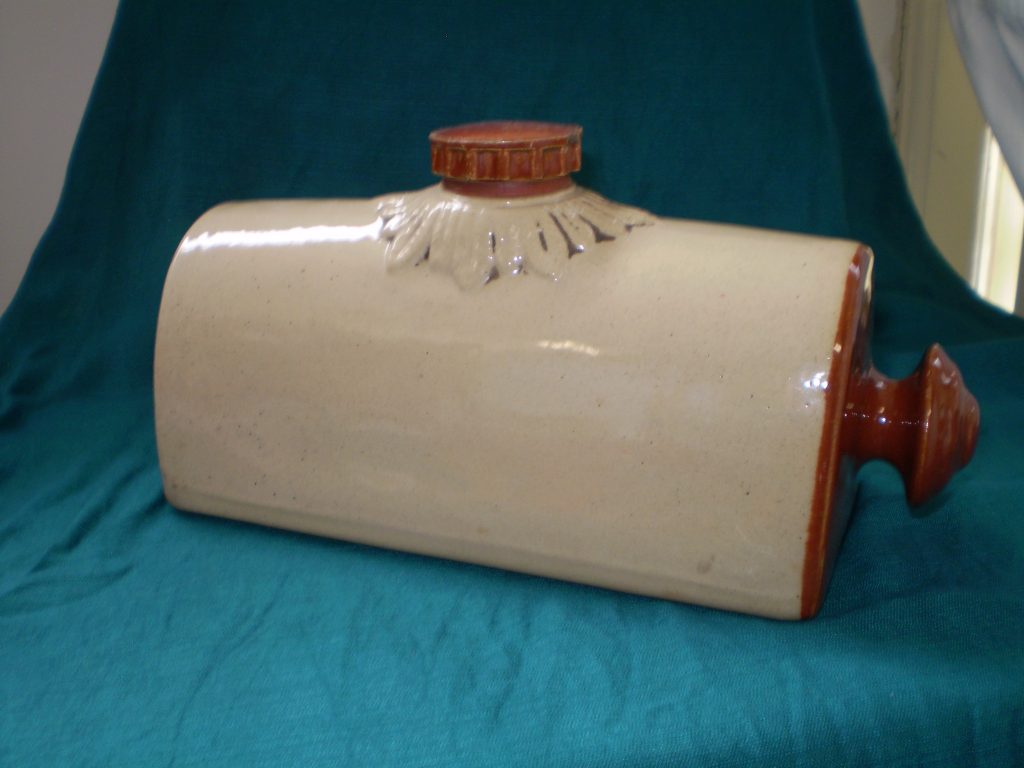 Here is another photo of a different type of bed warmer, it is made of stone and the oldest in the Centre’s collection. The stone bed warmer was made from a certain type of clay fired at a particularly high temperature and glazed so that it resembles polished stone. In fact, stoneware was often just called ‘stone’. Stone hot water bottles were much heavier than today’s rubber ones, particularly when filled with water. The hot water bottle was filled with hot or boiling water through the neck at the top which was screwed closed afterwards. Then it was dried with a cloth if any water had escaped and put between bedsheets to warm the bed. 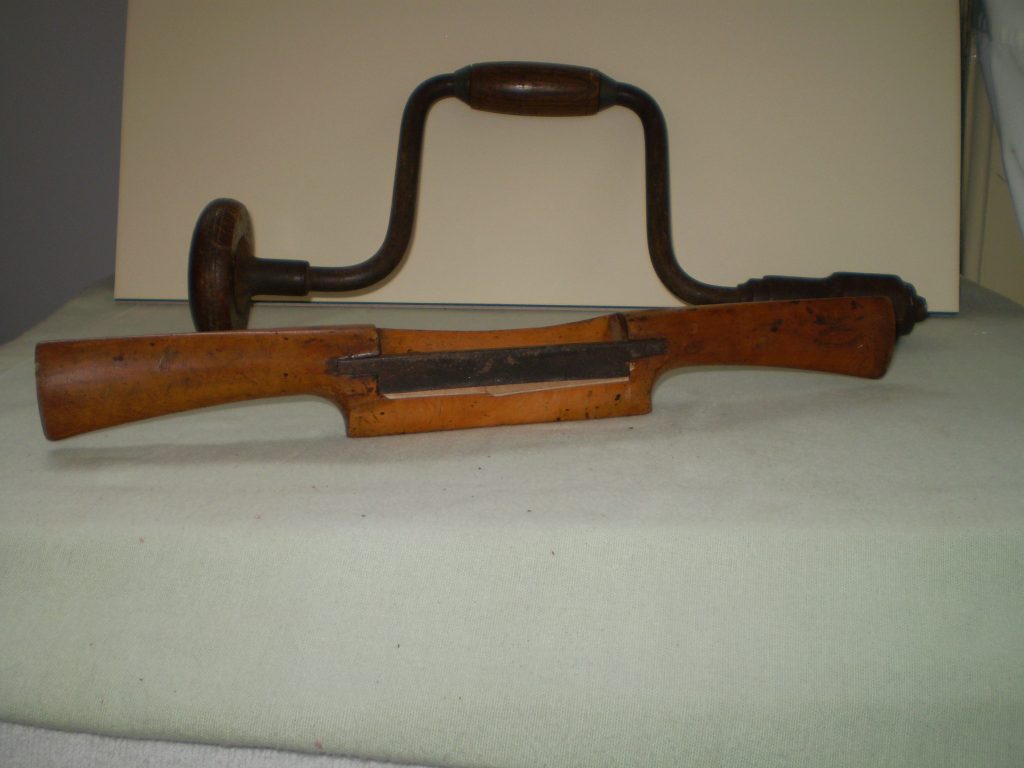 The item shown above is a wood plane and drill. A wood planer is a tool that reduces the thickness levels of all kinds of wood surfaces, whether it be a large cut of wood (slab) or a simple board for a timber deck. A wood planer will do the perfect prep work for the job. It can also be used to flatten and smooth wood depending on the project it is being used for. Although experiments with planes with cast iron soles were taking place as early as 1827, it was not until about forty years later that a satisfactory tool was marketed. The man responsible for much of this development was an American, Leonard Bailey of Boston, Massachusetts.

Bow and pump drills remained the metalworker’s prime tool for drilling small holes until the first geared hand drill was invented in 1805. Like every other tool, it underwent many improvements before acquiring its present rugged simplicity. Its great advantage lies in its unidirectional motion and the gearing that rotates the drill faster than the rate at which the crank is turned. 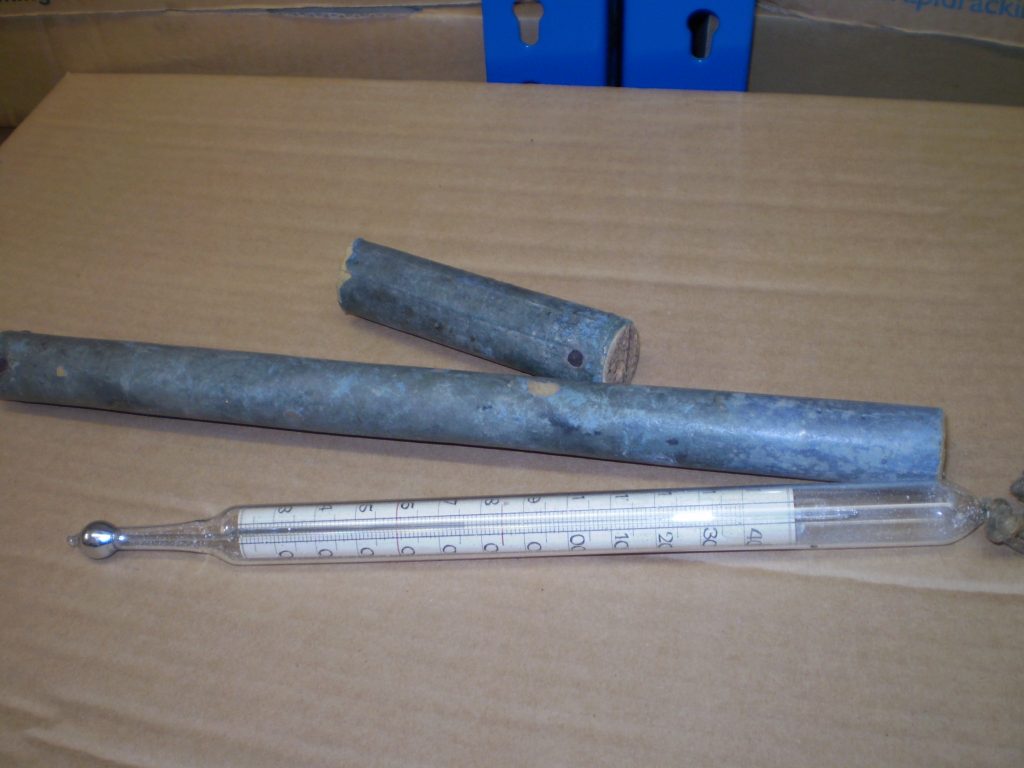 Above is a floating dairy thermometer used to test butter during churning. The one in the Centre’s collection is quite rare because the bulb containing the mercury usually would have been broken and it is with its original case. Thermometers were used continuously in the farmer’s dairy for monitoring not only the condition of the product but also the temperature of the milk room to prevent any spoilage. It was important for milk thermometers to have clearly defined graduation marks which could be observed readily and which were contained within the thermometer’s body so as to not allow the accrual of bacteria or hardened milk in the cavities that were formed by external scratches. 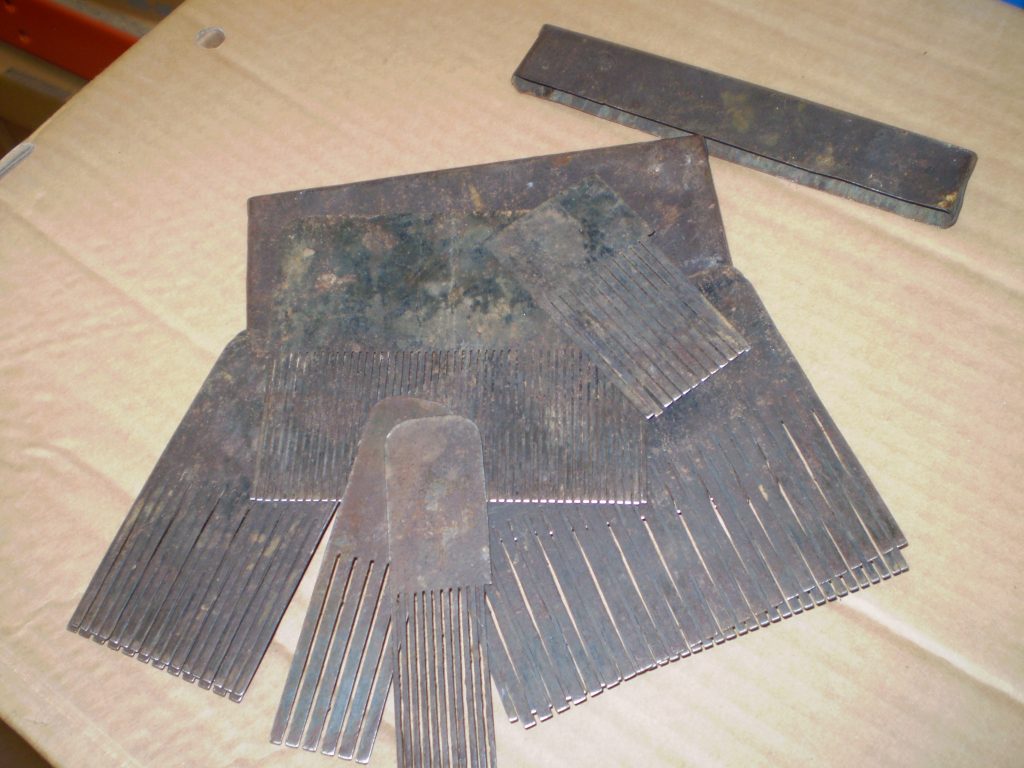 Have you solved the mystery of this one yet?

These objects are a set of Graining combs, used by decorators to give the effect of grained wood. They are metal and with the original case. Graining was common in the 19th century, as people were keen on imitating hard, expensive woods by applying a superficial layer of paint onto soft, inexpensive woods. 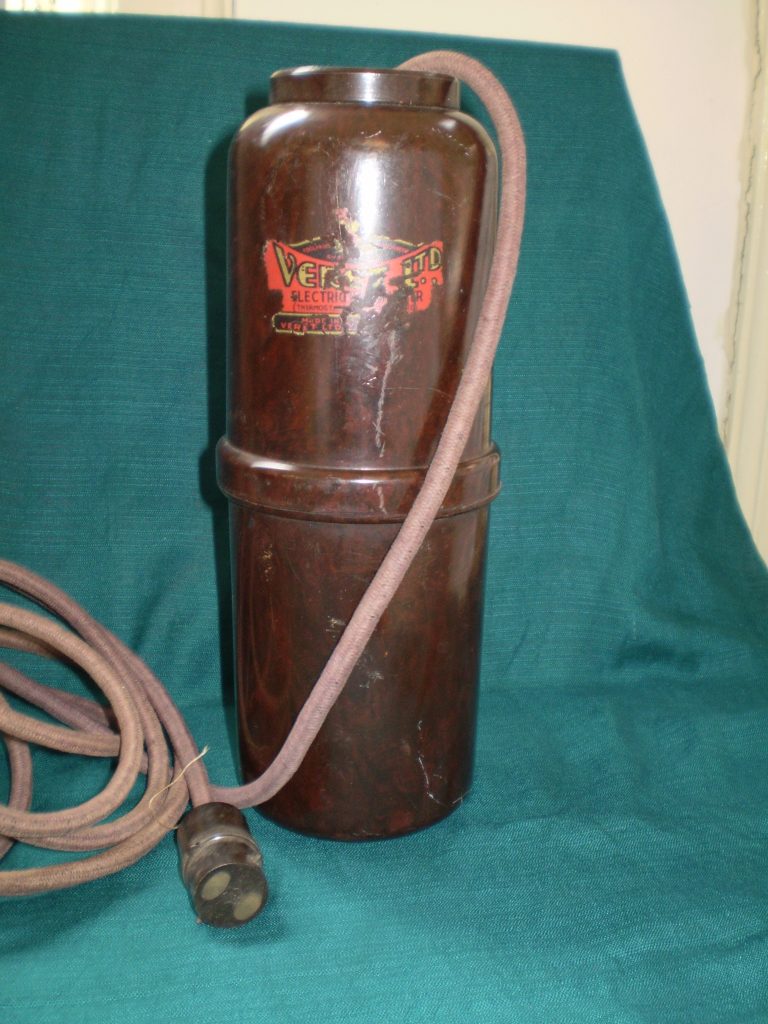 Another bed warmer from the collection, this is a later version and it used electricity to heat up the water. 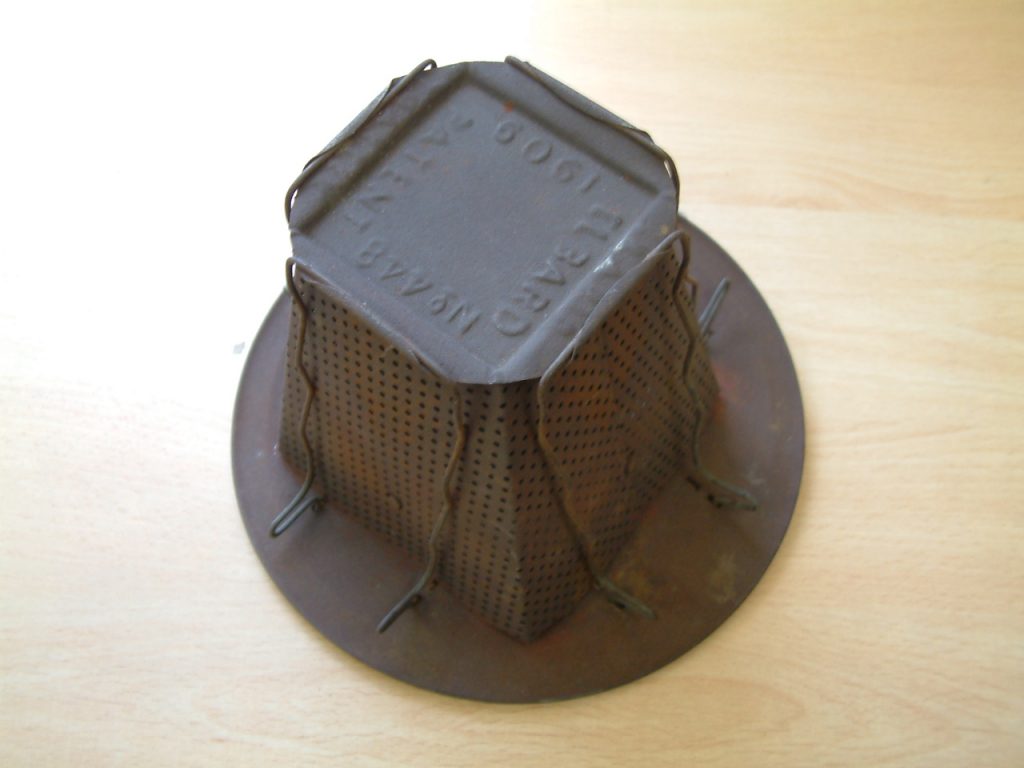 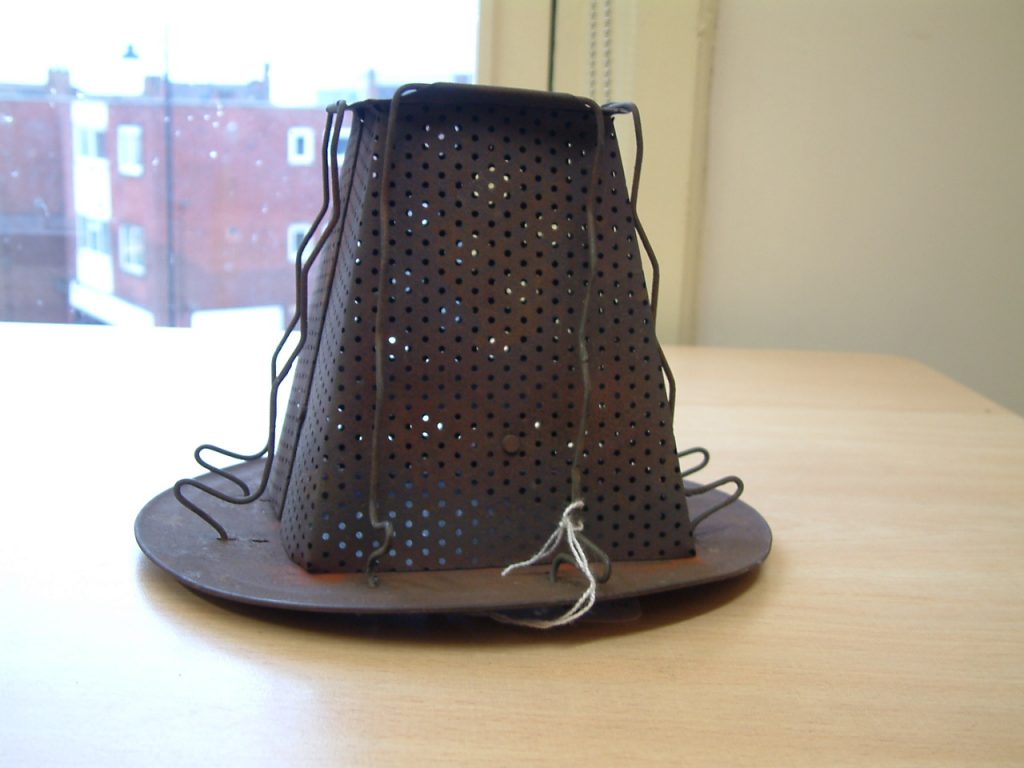 The advent of electricity in the home in the 1920s spawned a plethora of gadgets to make life in the kitchen much easier, including the toaster. Women previously relied on manual tools such as toasting forks and racks designed for use over an open fire or gas flame.

Original electric toasters like our own item above consisted of a heating element and a stationary wire frame to hold the toast in place. Most were mounted on a porcelain base and posed a burn hazard to those charged with making breakfast. Toaster manufacturers in the 1920s added a protective case and a variety of clever mechanisms to automatically turn the bread for easy toasting on both sides. It was an amazing new invention! 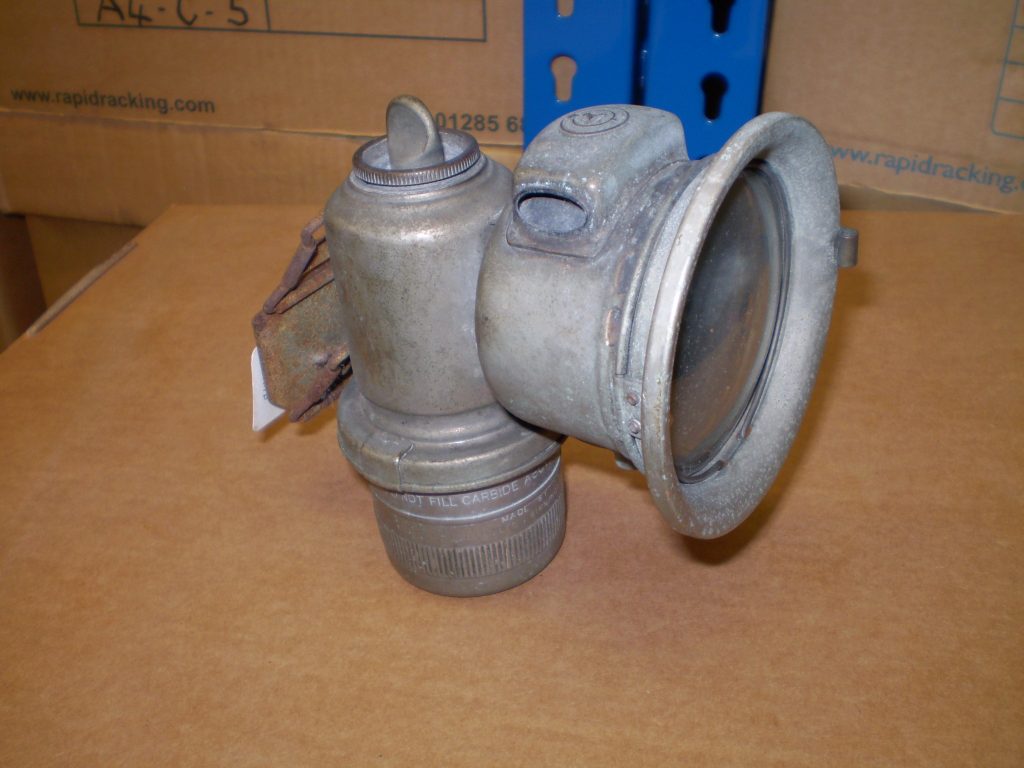 The last item from the collection is a Carbide Motorcycle Lamp. Circa 1920. Made by Millers of Birmingham. The company also made smaller ones for bicycles and larger ones for cars. The lamps represent a pioneering technology from early 20th century Britain. They produce and burn acetylene, and were originally used in mines before they became a more common form of illumination for vehicles and buildings. The item is preserved in the Heritage Centre’s collection as a historical object once used by a Gainsborough person.

Thank you to Archive Officer Rosemary Speck for sharing these items from the Centre’s collection.

Your ticket for the: Objects from the Archives